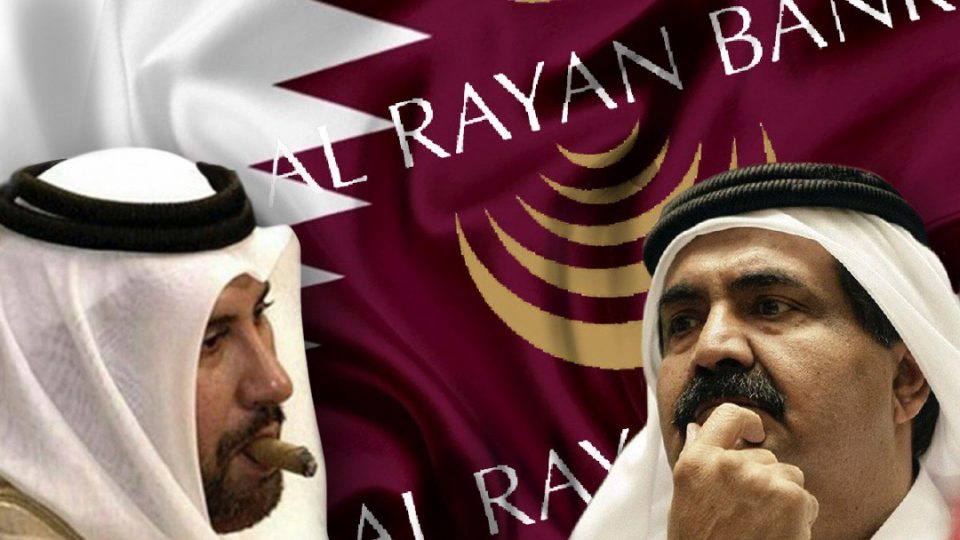 For a long time, the Doha authorities’ defence strategy, faced with increasing revelations about the involvement of many Qatari dignitaries in terrorist financing scandals, has been to describe them as individual initiatives that do not represent the government.

However, the latest revelations in the Anglo-Saxon press point to prominent members of the princely family of the al-Thani. For example, following recent revelations in the Times about the al-Rayan bank scandal, former Prime Minister and Foreign Minister Hamad bin Jassim al-Thani – who had already been splashed last February by a corruption scandal linked to the Barclays bank – panicked. According to British consulting and strategy firm Cornerstone Global, the former strong man from Doha, who was the right-hand man of former Emir Hamad bin Khalifa al-Thani and who is still linked to him in business, has put several of his properties in Paris and London up for sale at discount prices.
Indeed, on August 5, the Times revealed that al-Rayan Bank, the largest and oldest Islamic bank in Britain, which provides sharia-compliant banking services to more than 85,000 customers, is operated by Qatar to finance some 15 Islamist organisations, including one association on the US terrorist lists and four other entities (a mosque and three charities) that have taken refuge with al-Rayan Bank following the freezing of their accounts by other British banks, such as Barclays, HSBC, NatWest and Lloyds, in connection with terrorist financing investigations.
The other ten controversial organisations, funded by Qatar through the al-Rayan bank, are linked to the Muslim Brotherhood. The most famous is Nectar Trust, which took over from the British branch of Qatar Charity, dissolved in 2014. Nectar Trust is said to have paid more than £37 million (€40 million) via al-Rayan Bank to entities linked to the Muslim Brotherhood across Europe.
Yet, 70% of al-Rayan Bank’s capital is held by the Qatari bank Masraf al-Rayan, based in Doha, the majority of whose shares are held by state agencies. The remaining 30% of al-Rayan’s capital is held by an investment portfolio owned by the Qatari sovereign fund and led by Hamad bin Jassim al-Thani. Hence the latter’s readiness to liquidate his properties in Great Britain and France, estimated at around $869 million, for fear of being subject to a freezing of his assets for terrorist financing, if the investigations launched against al-Rayan Bank succeed in establishing his personal responsibility for the largesse granted by this bank to extremist organisations.
The names of two other members of the al-Thani family, and not the least, are mentioned in Western investigations and judicial complaints. They are two brothers of the current Emir Tamim bin Hamad bin Khalifa al-Thani. The first, Fahad bin Hamad bin Khalifa al-Thani, whose Salafist tendencies are an open secret known to all Western chancelleries, is cited in an investigation targeting an association that finances a radical madrasa (Koranic school) in Pakistan. The second, Khalid bin Hamad bin Khalifa al-Thani, has been the subject of a federal complaint in the United States since July 23 for having ordered an attempted murder of two American citizens.
The fourth member of the princely family, suspected of terrorist financing, is Abdulaziz Abdulrahman al-Thani. A key figure in Qatari “charities”, he was successively the CEO of the Qatar Charity Foundation, the Qatari Royal Family Council and the Qatari Joint Committee for Relief. He currently chairs two Islamic associations in Switzerland, Qoranona and Aziz Aid, co-led by Nicolas Blancho, a highly controversial Swiss converted Islamist, described by the Swiss press as “the most dangerous Islamist in the country” and nicknamed “Bin Laden of Biel” (see page 12 in Ian Hamel’s column).
Blancho has set up two Swiss associations, which serve as parachutes, through which Qoranona and Aziz Aid provide financial support to Salafist networks. These are the Islamic Council of Switzerland (CCIS) and the Association of Muslim Scholars (ASM).
However, the Secretary General of the CCIS, Qatari Ali bin Abdullah al-Suwaidi, is on the US blacklist of personalities financing terrorism because of his financial support for al-Qaeda. ASM President Abdulmohsen al-Mutairi (Blancho is only the Secretary General) was also registered by the US Treasury in December 2016 on the list of personalities financing terrorism. The same is true for Abdel Wahab al-Homaiqani, a member of the ASM leadership, who was pinned for providing logistical support to al-Qaeda in Yemen (AQPA). And Shefqet Krasniqi, another WSA executive, was sentenced in Kosovo in February 2017 for terrorist financing and tax evasion.