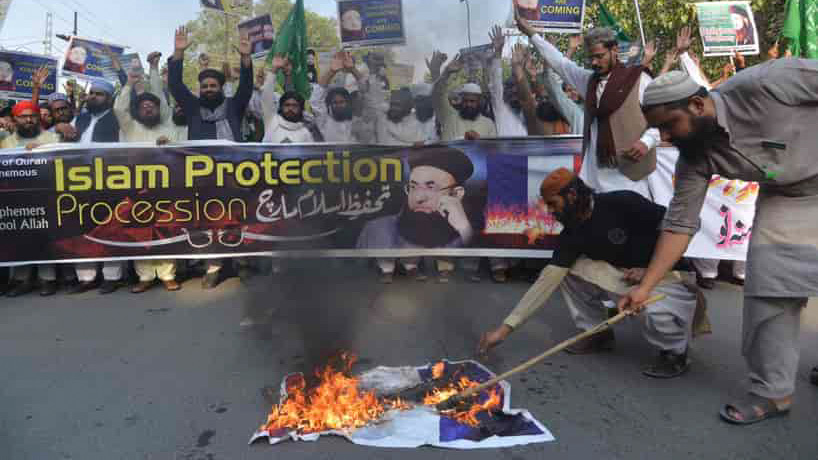 Pakistan: Leader of a global Islamist front against “blasphemy”

On September 2, the trial of the January 2015 terror attack at the Charlie Hebdo office and the Hyper Cacher of Porte de Bagnolet in Paris commenced at the Paris Criminal Court. The same day, the Charlie Hebdo magazine re-printed the cartoons of Prophet Muhammad that had made those who worked in the magazine target of lslamist terrorists. When questioned during his visit to Lebanon, French President Emmanuel Macron said he would not intervene against the reprint of these cartoons, as the press in France enjoys freedom of expression and even the freedom to blaspheme. While Mr. Macron’s statement was well received in France and in most countries around the world, it sparked strong opposition in some countries in the Muslim world.

The Iranian government reacted strongly against the re-publication of the cartoons with the Iranian Foreign Ministry stating “the offensive act of the French publication is a provocation”. It further said that Iran also sees it as “an insult ta lslamic values and to the faith of more than a billion Muslims in the world”. Blasphemy is punished by death in Iran. On September 10, thousands of Iranians staged a protest in Tehran against the so called ‘act of blasphemy’ by the Charlie Hebdo magazine.

The Organisation of lslamic Cooperation also issued a statement condemning the French magazine for republishing the cartoons. Meanwhile, the AI-Qaeda issued a veiled threat to the French magazine in its publication One Ummah, warning that Charlie Hebdo would be mistaken if it believed the 2015 attack was a “one off”.

However, the strongest and most virulent backlash against France was witnessed in Pakistan, where radical Islamist groups took to the streets to protest, calling for the expulsion of the French Ambassador Marc Barety and suspension of diplomatic ties with France. The lead in these protests was taken by Tehreek-e-Labbaik Pakistan (TLP), a radical political party established in 2015, with a growing support base. Thousands of TLP supporters including its leader Khadim Hussain Rizvi, came out to protest in various cities like Islamabad, Multan and Karachi, with the French flag being burnt across the country. The party also ran an aggressive and hateful social media campaign, calling for jihad against those committing blasphemy. Further, Maulana Abdul Waseh, head of the Islamist group Jamaat Ulema e lslami Baluchistan called the publication of cartoons a blatant act of terrorism. Another group Tahafuz-e-Khatm-e-Nabuwat Conference called the makers of the ‘blasphemous caricatures’ as the biggest terrorists. Official authorities were no less outspoken. Pakistan’s Foreign Office stated that “Such a deliberate act to offend the sentiments of billions of Muslims cannot be justified as an exercise in press freedom or freedom of expression”.

These multiple protests in Pakistan by the very powerful radical lslamic groups is a reflection of the increased ground support and influence that these groups have in the country. interestingly, in the 1970s and 80s, it was the Pakistan Army Chief General Zia-ul Haq who bolstered the influence of the lslamic clergy in Pakistan by appointing them in large numbers in the government and implementing blatantly inhuman blasphemy laws. It was also General Zia who initiated the Pakistan Army’s policy of using lslamic terror groups as strategic assets against neighboring India and as a means to keep itself relevant to the US and the western world, especially in connection ta Afghanistan.

The seeds of lslamic radicalization has no doubt taken deep roots in Pakistan. This was observed at the anti-Shia protests in Karachi on September 11, where the protestors declared Shias as not Muslims. At the protest, thousands of protesters were heard chanting “Shias are Kaffir” (disbelievers) and holding banners of Sipah-e-Sahaba Pakistan, a terrorist organisation that has a record of targeting Shias over the years.

Most worrying is that these protests are a re-iteration of the fact that terror/lslamic radical groups in Pakistan can carry out their activities without any restraint and often with the support of the State authorities. Another issue that should concern the democratic and secular world is the country’s blasphemy laws, under which members of the minority religious groups, mainly Christians and Hindus, are often sentenced to death by Pakistan’s courts on frivolous charges of blasphemy.

The recent anti-France protests in Pakistan is an indication of the changed radical fabric of the country and a warning signal that it may soon emerge as the largest breeding ground of potential terror recruits. As more and more countries face the challenges of Islamic radicalization, it is important that a combined approach be developed by countries sharing democratic ideals, in the West and even within the Islamic world, to face up to nations like Pakistan which pose a serious threat to world peace and security. And the first step towards this combined approach would be to stop seeing these countries as “normal” partners in bilateral and multinational engagement and trade.