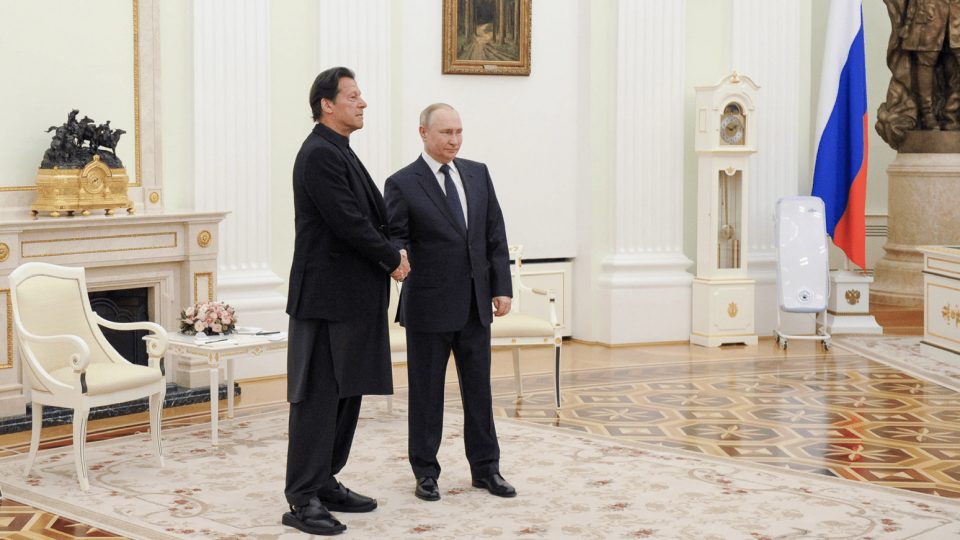 Pakistani Prime Minister Imran Khan arrived in Russia on a 2-day official visit the very same day that Vladimir Putin launched an attack on Ukraine. On his arrival at Moscow airport, the South Asian leader was caught on camera gleefully quipping “What a time I have come! so much excitement”. This reaction from the leader of a so-called democratic nation immediately caught media attention and was largely interpreted as Pakistan having thrown its support in favour of Russia on the Ukraine issue. The other interpretation could be Imran Khan’s complete disregard for the international rule based order and a lack of understanding of the gravity of the situation where a sovereign nation’s territorial integrity had been unilaterally violated by Russia.

Both interpretations are likely to be correct. For Pakistan, supporting Russia at a time when Moscow faces international criticism, would seem to be a natural choice- Russia was an ally of China, Pakistan’s closest and possibly only friend. In the last few years, Pakistan’s dependence on China has increased exponentially especially with the US tightening its purse strings following  Pakistan’s failure to deliver on substantive action against terror groups. China, on the other hand, has poured in billions into the country facing near bankruptcy, especially for the Belt & Road Initiative, apart from supporting Pakistan at the UN and other multilateral forums. In contrast, the country has faced regular Western criticism for multiple issues including its inability or lack of desire to crack down on Islamist radical groups in the country. This would explain why gradually one has seen Pakistan gravitate towards countries that were anti-US.

Thus, it was in vain that European and Western ambassadors tried to get Pakistan to vote for the UN resolution against the Russian war in Ukraine. “As Heads of Mission to the Islamic Republic of Pakistan, we urge Pakistan to join us in condemning Russia’s actions and supporting respect for the United Nations Charter and the founding principles of international law. “, had indicated, in a joint press release, the ambassadors of the member countries of the European Union, the representative of the EU, the ambassadors of Norway, Switzerland and Japan, the British and Canadian high commissioners, and the responsible of Australian Business in Islamabad.

Further, seen from the Pakistani Prime Minister’s perspective, aerial bombing of civilian areas may not seem to be a matter of grave concern. After all, the Pakistan Army does have the disrepute of aerial bombing on its own civilian population on many occasions, whether during the ‘anti-terror’ operation Zarb-e-Arz in Waziristan or in Balochistan.

Whatever the reasons for Imran Khan’s irresponsible comment, expressing his joy at being in Moscow on the very day of the launch of the invasion of Ukraine, it can be said with certainty that the developments of the war in Ukraine will cement the convergence of a bloc made up of China, Russia and their “satellites” like Pakistan and Belarus. This bloc should continually challenge the international order based on the rules of law recognized and protected by democratic forces around the world. And this with the aim of replacing them with a new world order under the leadership of China.