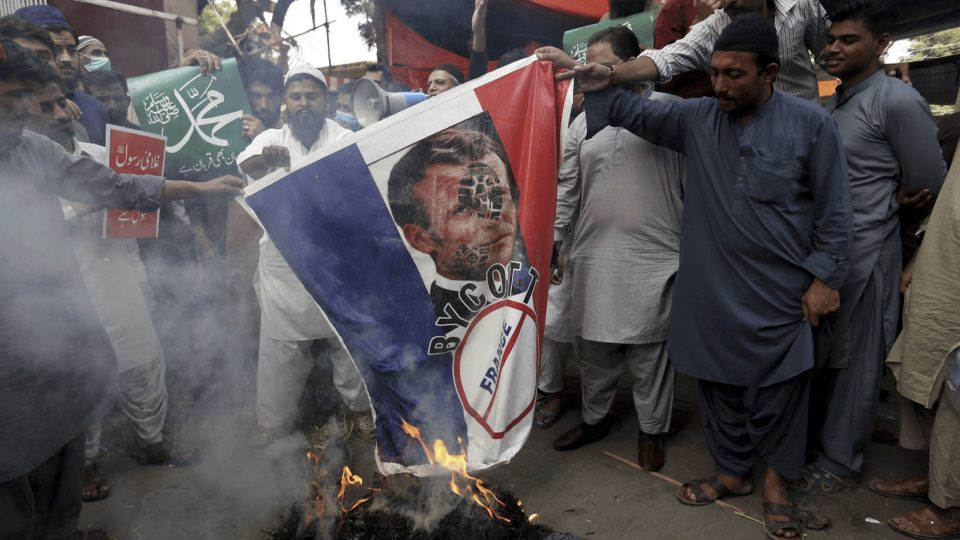 Pakistan has been witnessing a rapid breakdown of its internal administrative machinery, with its police and security forces unable to control the country-wide violence engineered by the supporters of the radical Islamist party, the Tehreek -e-Labbaik Pakistan (TLP) that has been demanding the ouster of the French Ambassador and halting of trade relations with France. While the spotlight is on the grim domestic security situation with the government being held hostage by the TLP, the condition of its economy and its diplomatic standing is no better.

The government’s mishandling of the anti-France protests as well as the initial tacit support of Prime Minister Imran Khan and other members of his cabinet to the blasphemy charges levelled by the TLP against the French President has not gone down well in Paris. The recent incidents of violence have revealed the inability of the Pakistan government to vouch for the safety of French nationals living in the Muslim-majority nation, compelling France to issue an advisory for its citizens to leave Pakistan temporarily.

The situation is unlikely to change in the coming days. The developments over the last few weeks have come as an eye opener to many in France on not only the deep roots of Islamist radicalization in Pakistan but also the incapacity of the Pakistani establishment to openly challenge and thwart the unreasonable demands of Islamist groups, even though it hurts the economy or foreign relations of Pakistan.

Islamic jihadi groups that were created and sustained by the Pakistan Army to launch proxy war against India, have become too powerful to be kept on a leash and even dictating foreign policy decisions. This is not a completely new phenomenon as the India policy of successive Pakistani governments have been held hostage by the country’s Army and over the last decade by jihadi groups, who have incited anti-India and anti-West public opinion while playing ‘Islam under threat’ card. Therefore, in public meetings, the leaders of terror groups like the Jamaat-ud-Dawa and Jaish-e-Muhammad have repeatedly spoken against the civilian government and the Pakistani Army for not doing enough against India to assist the Muslims in Kashmir.

With Pakistani Islamist groups becoming more and more a part of the mainstream political system, any dilution in the anti-India rhetoric by the civilian government has become increasingly difficult. This would explain why Prime Minister Imran Khan recently announced that any move towards normalisation of relations with India would be taken only after the reversal by the Indian government of its August 5, 2019 constitutional reforms on Jammu and Kashmir.  The announcement came as a surprise, especially as in the last couple of months, both Imran Khan and Pakistani Chief of Army Staff General Qamar Javed Bajwa had made public statements indicating a desire to improve relations with India. These statements were followed by Indian and Pakistani Army commanders agreeing to a ceasefire along their border. So why did Imran Khan pull back vis-à-vis relations with India?

The Pakistani PM probably panicked in the face of criticism, especially from the opposition and popular Islamist groups, against his government’s decision to import cotton and sugar from India. Some have even termed imports from India as ‘haram’ of forbidden in Islam. The government succumbed to domestic pressure, even though improving ties with India would only have helped Pakistan. For instance, resumption of trade would have allowed the country to benefit from India-produced and cost effective COVID-19 vaccines, while import of food items from India could have assisted in arresting the spiraling food inflation in the country. The small but significant steps that were lately being taken by the two countries had offered an opportunity to Imran Khan to get out of the blind alley it found itself in with regard to relations with its neighbour. But it appears to have blown this opportunity.

The influence of these detractors of peace in the region is so strong that it transcends even the heavy economic costs being paid by Pakistan. Therefore, by demanding from India a reversal of its decisions on Kashmir as a precondition for opening trade in commodities, Pakistan only ends up hurting itself. With the country’s economy in doldrums, food inflation is becoming a major political issue, one which even has the potential of impacting the Imran Khan government. Despite this, Imran Khan is worried more about the internal repercussions of importing these essential goods from India.

Therefore, for French foreign policymakers to understand Pakistan’s actions or inactions on the present diplomatic row caused by the TLP, one just needs to observe the country’s repeated flip flop on its India policy, that has been guided more by popular sentiments even at the cost of hurting Pakistan’s interests. With anti-French sentiments running high, French diplomats should not expect the Pakistan government to take a rational stand on the issue.