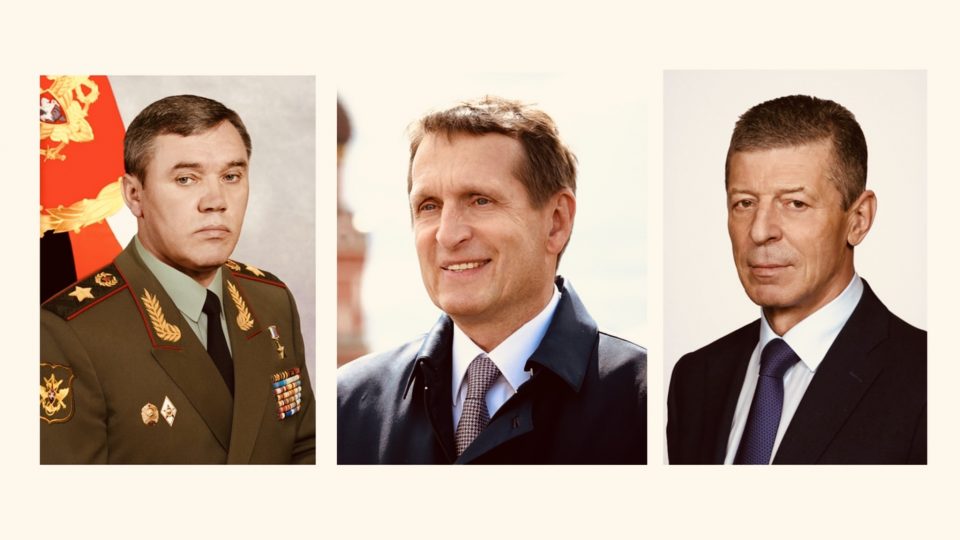 Who are Putin’s war-mongering advisors?

In the West, Vladimir Putin is most often described as an isolated, even “paranoid” leader, enjoying absolute power that dispenses him from consulting or listening to advisers. However, if it is obvious that Putin is an autocrat who has freed himself from any counter-power, there are advisors in his “first circle” who are known for their moderation and others who are openly warmongers.

Among the moderates, only the Minister of Foreign Affairs, Dimitri Lavrov, would still dare to express opinions contradicting Putin, of whom he has been an old companion for over eighteen years. In the war-mongers’ camp, Lavrov’s biggest “bête noire” is Dimitri Kozak. Head of the presidential administration in the Kremlin since 24 January 2020, he was previously Deputy Prime Minister. As such, he managed the annexation of Crimea in 2014. Highly listened to by the master of the Kremlin, he is the architect of the Putin doctrine consisting of increasing military pressure in order to be able to negotiate from a position of strength.

Another war-mongering adviser of the Kremlin is Sergei Narychkin, the boss of foreign intelligence. A former president of the Duma, he has been in charge of Russian counter-intelligence with an iron fist since 2016. In this capacity, he is the architect of the suppression of civil society and the persecution of Russian opponents, including abroad. He will stop at nothing to satisfy his master, yet he was publicly humiliated by Vladimir Putin during a televised exchange on 21 February, three days before the invasion of Ukraine.

Following the affront he suffered, Narychkin was said to have been dismissed, disgraced or even liquidated. But the best-informed sources say that the presidential anger that fell on him was only temporary: at the time of the events, Putin was upset that his counter-intelligence chief had failed to identify a supposed “mole” suspected of informing the Americans about the Kremlin’s intentions and secret plans in the weeks leading up to the invasion of Ukraine.

Another hawk among Putin’s close advisors is General Valery Gerasimov, Chief of Staff of the Army. He is the architect of the military strategy known as the ‘new generation war’. His studies theorising the notion of a “global conflict”, at once military, economic and information, have been studied very closely for years by the Pentagon and NATO.

In his view, future conflicts will be totally different from the old paradigms of the Second World War or the Cold War. He considers, in the light of recent American and European military experiences (Gulf War, Afghan War, invasion of Iraq, intervention in Libya), that non-military factors (political, economic or cultural) now play a decisive role. He deduced that any military campaign or operation must now be considered as part of an ‘unconventional war’.

For this reason, he advocates that instead of declared wars, characterised by a strict delimitation of military efforts, with large conventional forces fighting decisive battles, preference should be given to ‘undeclared wars’ based on hybrid operations, combining military and non-military activities and engaging smaller but more precise and effective forces.