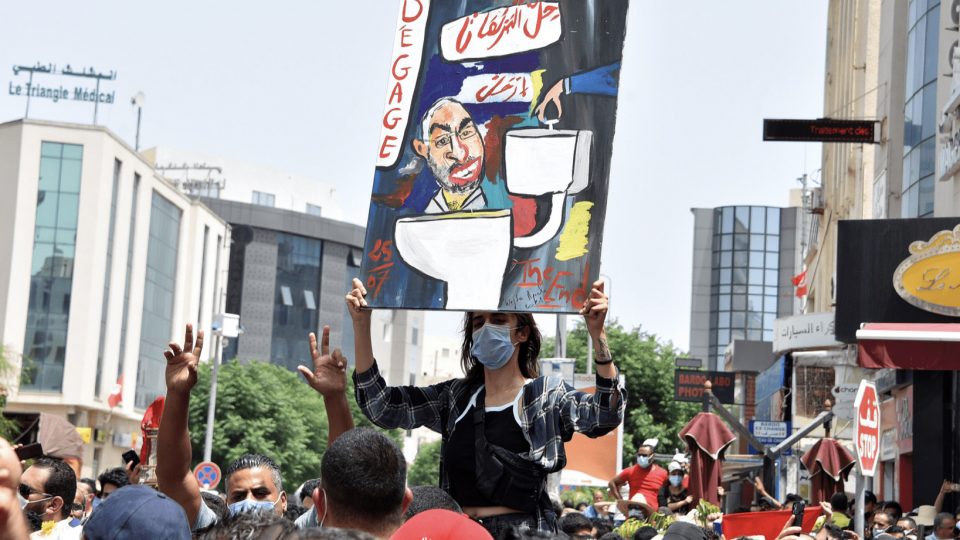 Referring to article 80 of the constitution, the Tunisian president, elected in October 2019 with 72% of the vote, announces the dismissal of the government chaired by Hicham Mechichi, the freezing of the work of the Assembly of the Representatives of the People (parliament) and the lifting of the immunity of all deputies.

A thunderclap described by the supposedly moderate Islamists of Ennahda – and their “big arms” of the El-Karama alliance – as a “coup” damaging “the revolution and democratic institutions”. However, the “stop blow” decided by President Saïed is greeted by scenes of popular jubilation all over the country!

And even though the personalities most critical of “President Saïed’s interpretation of article 80 of the constitution” agree that “the return to the regime that prevailed until July 25 is neither possible nor desirable”, the leader of Ennahda Rached Ghanouchi decides to attempt a counter-offensive to “save the revolution and democracy”, according to the terms of a statement posted on his facebook page.

Less than two hours after President Saïed’s announcements, Ghanouchi – who also serves as speaker of parliament – holds a long conclave at his party’s national headquarter, at the same time when the police force struggled to contain the crowds which poured on the headquarter of the Islamist party determined to sack or burn it, like many party offices across the country.

During this conclave, gathered around “Sheikh” Ghanouchi, his close advisers as well as the leader of the El-Karama Alliance, the deputy Seifeddine Makhlouf. The same one who had attacked, under the dome of the Bardo Palace (seat of parliament), the deputy Abir Moussi, president of the Free Destourien Party.

The “Sheikh” decides to launch, that same evening, a coup inspired both by the response of Turkish President Erdogan, during the attempted coup of July 2016, and by the “strategy of rotting” adopted by the Egyptian Muslim Brotherhood during the sit-in in Rabia Square, which ended in carnage.

Like Erdogan, Ghanouchi decides to resort to live facebook, to harangue his troops, calling on them to join him in front of the gates of the parliament occupied by the armored vehicles of the army. A maneuver with a double objective: to gather a crowd large enough to create a balance of power that would oblige the military to give it access to parliament. Then, the scenario – as it was revealed, in real time, by the zealous deputy of El-Karama, Seifeddine Makhlouf, at the microphone of the Qatari channel al-Jazeera – consisted in summoning the office of the Assembly, chaired by Ghanouchi, in order to launch a parliamentary motion aimed at “dismissing President Saïed for violating constitutional legitimacy”. And as in Rabia Square in Egypt, the supporters of Ennahda had to mass in the courtyard of the parliament, to serve as popular backing for the Islamist counter-offensive and as…cannon fodder, if the army attempts a coup against the deputies.

However, after nearly two hours spent in front of the gates of the parliament, access to which he was prohibited by the military, the “Sheikh” – surrounded by about twenty people from his close guard – ended up going to the obvious: the expected crowd is not there!

The multiplication of calls, via an official Party statement and a long Facebook live on the “Sheikh” page, relayed by the Qatari channels al-Jazeera and al-Araby, will not change anything. Worse still, around 4 am, the opposite effect occurs: dozens of opponents of the Islamist party flock to the Bardo, to do battle with the “Sheikh” and his companions. The police intervene, but the “Sheikh” realizes that his institutional poker game has failed.

Before leaving the scene, a sentence from the crowd of his opponents rang in his ears, like a blow of cleaver: Ya Ghanouchi Babourek Zaffar! A formula, in the Tunisian dialect, that could be translated as: Game Over!