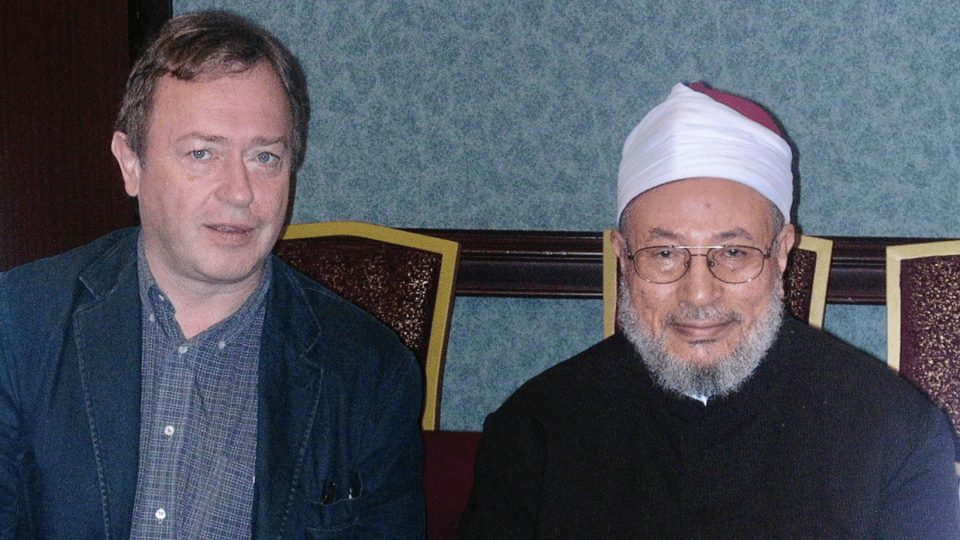 The Qatari-Egyptian Youssef al-Qaradawi, presented as the spiritual guide of the Muslim Brotherhood, died on 26 September at the age of 96, but was in fact only a courtier who adapted his preaching to what his Qatari protectors wanted to hear. For he owes his immense popularity to the Qatari channel Al-Jazeera where, for years, he was able to distil his retrograde version of Islam in his programme “Sharia and Life”. Thus, a woman who wears a tight-fitting garment will not only not enter paradise, but she “will not even smell it”. A Muslim woman’s clothing “must not resemble that worn especially by the unbelievers, the Jews, the Christians and the idolaters”, he warned. As for men, their private parts “are between the navel and the knees”. This means that they must not allow women to rave about their thighs… and cast “hungry and greedy” glances at them, which Youssef Qaradawi, father of modesty, called “fornication of the eye”

In his best-known book, “The Lawful and the Unlawful in Islam”, translated into many languages, the preacher describes homosexuality as a “vicious act”, a “perversion of nature”, a “plunge into the cesspool of filth”, and a “depravity of manhood”. On the other hand, the beard is a “proof of virility”. It is therefore reprehensible to “shave it or trim it or shorten it”. The theologian takes the opportunity to deplore the fact that “the vast majority of Muslims have begun to shave their beards, in imitation of their enemies and the colonisers of their country, Christians and Jews”.

Such soothing, and ultimately rather hollow, words are laughable. Yet they were listened to religiously by millions of Muslims around the world. I was able to attend a European Council for Fatwa and Research in Istanbul many years ago. I was impressed by the reverence of the thirty or so Muslim “scholars” from France, Britain, Germany, but also from Sudan and Mauritania, who made up the Council. None of them would have dared to contradict, even on the smallest detail, the most famous preacher of the Arab-Sunni world.

By allowing a woman to open the post office in her husband’s absence, on the condition that the postman was in his sixties, or by accepting that Muslims in Europe could use vinegar made from alcohol, Youssef al-Qaradawi had managed to pass himself off as a moderate intellectual.

How can we explain the aura that this preacher enjoyed? Born in Egypt into a family of small farmers in the Nile Delta, fatherless at a very young age, Youssef al-Qaradawi, according to his legend, memorised the Koran at the age of 10. After graduating from the prestigious Al-Azhar University in Cairo, he joined the Muslim Brotherhood, founded by Hassan Al-Banna in 1928. This led to his arrest and imprisonment on several occasions, in 1949, 1954 and 1962.

Like most of the members of the Brotherhood with university degrees, who were stripped of their Egyptian nationality, Youssef al-Qaradawi found refuge in the Gulf countries, particularly in Qatar. In the emirate, he founded the Department of Islamic Studies at the University of Doha. In this country, which lacks cadres, he quickly obtained Qatari nationality.

Considered as a major personality of the Brotherhood, he was asked on several occasions to take over the leadership of the Muslim Brotherhood, which he refused. At least that is what he declared. However, on the Al-Jazeera channel, the preacher with the white turban will be able to express himself in absolutely all areas of life, whether it is religion, finance, the Internet or sexuality. He is the man who knows everything about everything.

Up to nine wives!

Youssef al-Qaradawi took advantage of this to multiply his provocations, without the Islamic organisations, in Muslim countries as well as in Europe, seeming to be offended by them. On 30 January 1999, on Al-Jazeera, he declared that “throughout history, Allah has imposed on the [Jews] people who would punish them for their corruption. The first punishment was administered by Hitler. With all that he did to them – and although [the Jews] exaggerated the facts – he managed to put them in their place. It was a divine punishment. Allah willing, the next time it will be by the hand of the believers”. Later, in 2004, he supported Hamas and justified suicide attacks in Israel: “Martyrdom operations are the weapon that God gave to the poor to fight the strong. It is the divine compensation. The society is a military society. Its men and women are soldiers in the army, who can be called up at any time. If a child or an old man is killed in these operations, he is not targeted and it is by mistake, and as a result of the absolute necessities of war, and absolute necessities lift the prohibitions”.

The preacher also authorised the extermination of all Alawites (a branch of Islam linked to the Shiites, which is in power in Syria), both military and civilian, men and women, judging them to be “worse than the Jews”.

Despite the publication of some 120 books, Youssef al-Qaradawi risks leaving only the memory of a second-rate theologian, a court preacher. A yes-man who adapted his speech to the wishes of his Qatari masters. The bad tongues will remember the revelations of his last wife, an Algerian woman forty years his junior, with whom I was able to speak in Doha. After their break-up, she told in detail about her illustrious husband’s behaviour in bed and his addiction to pornographic films!

When I last spoke to him in Doha, the founder of the European Council for Fatwa and Research complained bitterly about not being able to return to France since 2003. “I deeply regret this image of a fundamentalist that is sometimes attributed to me in France. On the contrary, I am a tolerant man, and I denounce terrorism”, he told me. I asked him if I knew of a French publisher who would agree to publish his memoirs. He said this with a big smile on his face, like a good old sugar daddy!