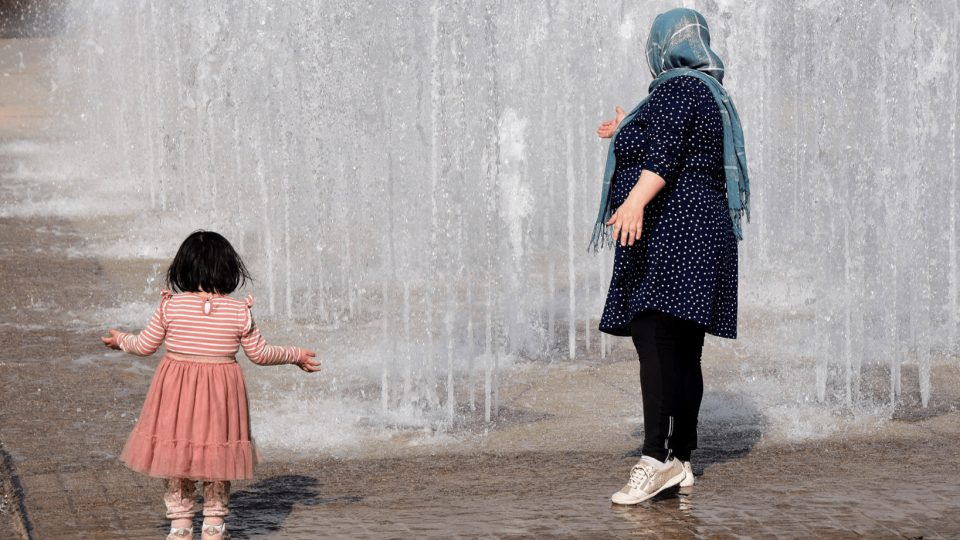 1- An overexposure that irritates and inflames the minds

Our survey shows that 57% of French people consider the visibility of Islam too important (against 8% who find it not important enough and 35% neither too nor not important enough). This political and media overexposure of Islam irritates French people of Islamic faith or culture and inflames the spirits of the general public. This is reflected in a clear bi-polar divide: 29% of French people think that in the current electoral campaign, politicians do not talk enough about Islam, while 27% consider, on the contrary, that they talk about it too much!

The irritation caused by this overexposure among French people of Muslim faith or culture is illustrated by a majority of 62% who consider that political figures talk too much about Islam. On the other hand, in the general opinion, two antagonistic tendencies can be observed. A majority of the categories of French people marked by conservatism and identity-based withdrawal consider that political figures do not talk enough about issues related to Islam (35% of Catholics are of this opinion, against 21% who find that Islam is talked about too much). On the other hand, among the categories of French people who define themselves as atheists or without religion, the trend is reversed: the majority consider that Islam is talked about too much (33%), against 21% who consider that it is not talked about enough. 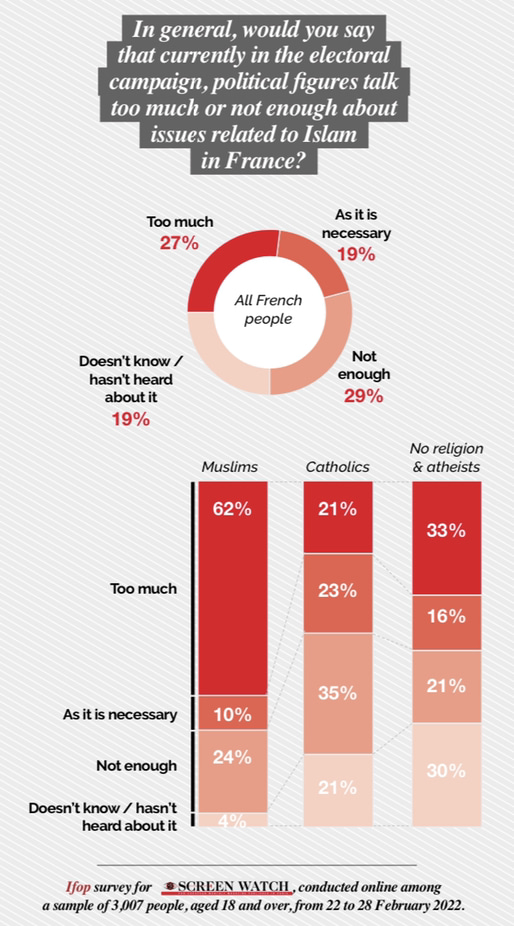 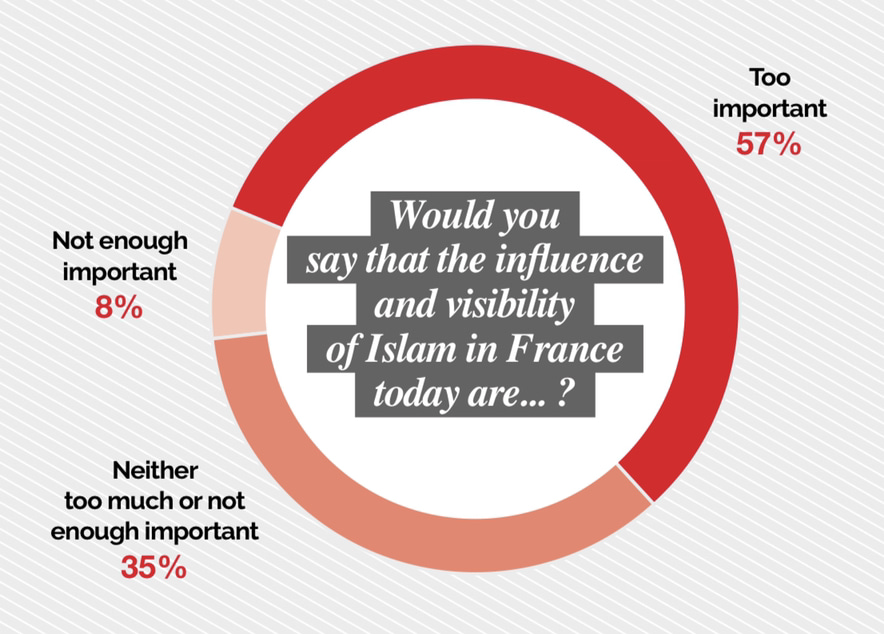 2- Integration has broken down, but the Muslim presence is becoming commonplace!

When asked whether Muslims and people of Muslim origin are well integrated into French society, the answer is unequivocal: 59% of them are negative. Worse still, 30% of Muslims themselves share this unfavourable opinion concerning the integration of their co-religionists!

This negative view of the ability of French people of Muslim origin to integrate is counterbalanced by a “trivialization” of the presence of a Muslim community in France: 38% see it as a threat to the country’s identity, against 22% who think, on the contrary, that it is a factor of cultural enrichment. But the majority tendency is to trivialise this Muslim presence. Thus, 40% consider that it represents neither a threat nor a factor of enrichment.

This tendency towards indifference is to be taken as a sign of evolution on the way to accepting the Muslim presence. In three previous surveys (2010, 2012, 2015), in response to the same question, the perception of the presence of a Muslim community in France as a threat was the majority trend: this hostile view of the Muslim presence was shared by 42% of the French in December 2010 (Ifop survey for Le Monde); 43% in October 2012 (Ifop for Le Figaro); and 40% in January 2015 (Ifop for Atlantico). 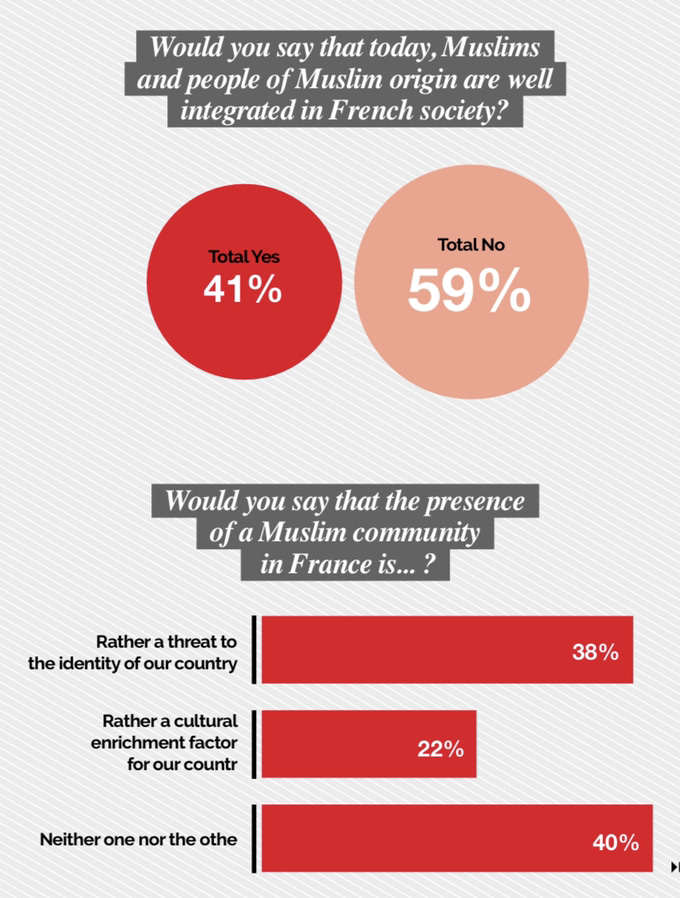 This title, borrowed from Djemila Benhabib’s book (see page 32), is the best response to the Islamophobia trial, instrumentalised by Islamists, which aims to portray France as a country hostile to Islam and racist against Muslims.

To the question “Would you say that French society is sufficiently open and welcoming towards Muslims?”, 70% of French people answered in the affirmative. A stable trend, since 69% of French people were already of this opinion in October 2012 (Ifop poll for Le Figaro).

Moreover, to the question “in general, what do you think of the Muslim religion?”, only 44% express concern, whereas this feeling of concern reaches 73% when the French are questioned about Islamism (see our survey “Islam, Islamism, communitarianism: what do the French think about it” / Watch Screen n°20/21, March-April 2022). Proof, if any were needed, that the French do not confuse (any more?) Islam and Islamism and do not mix Islamists and all Muslims. 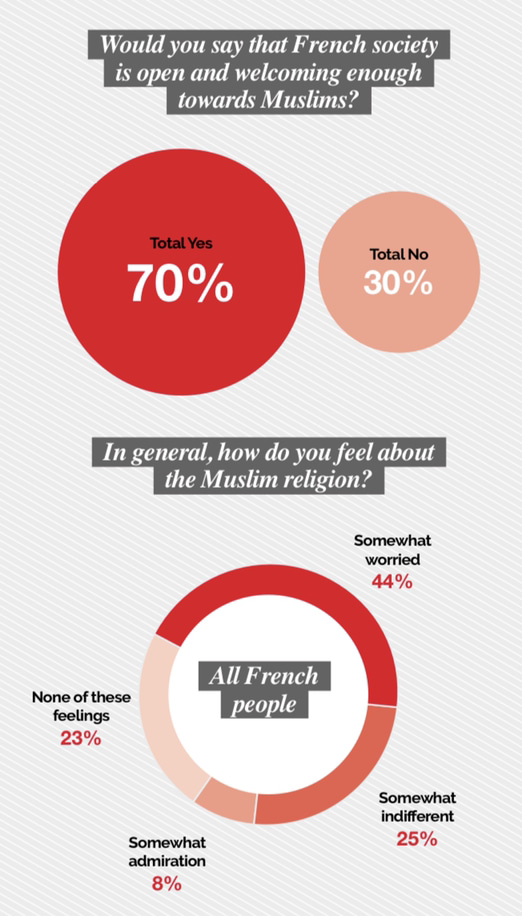 4- Islam in France: the questions that make people angry

Since the outbreak of the very first “headscarf affair”, in a secondary school in Creil, in September 1989, the issue of the Islamic headscarf has been the main bone of contention in French Islam. In the mid-1990s, the thorny issue of building mosques was added to this, particularly because of foreign funding and the control of Islamist movements (Muslim Brotherhood, Salafists, Tabligh, Turkish Milli Görüs, etc.) over so-called “radical” mosques, which are used to propagate Islamist discourse inciting hatred and violence.

Opposition to the building of mosques peaked at 38% in 1989, in the wake of the headscarf affair. It then dropped to 31% in 1994 and 22% in 2003. It then rose again in the context of the law banning religious symbols in schools, which gave rise to new cases of the veil (2003-2004). Opposition to the building of Mosques reached 39% in 2010, then 43% in 2012. Then, this rise has considerably increased since 2019, to reach 51% in 2022. And this is following the revelations of the book-investigation “Qatar Papers” by Christian Chesnot and Georges Malbrunot, on Qatari funding granted to radical mosques controlled by the Muslim Brotherhood.

Concerning the Islamic veil, its prohibition in public schools has always been supported by more than two thirds of the public opinion: the opposition to the wearing of the veil in school was 75% in 1989, it is 74% in 2022. With peaks of 90% in 2010 and 89% in 2012, due to the controversies over the full veil (Burqa) and the participation of veiled mothers in accompanying pupils on school trips.

However, while there is unanimity on banning the veil (like any other religious sign) in schools, in order to ensure respect for the principle of secularism, the banning of the veil in the street (and therefore in the public space) has long been a marginal demand supported only by the right-wing identitarians and the extreme right (31% in 1989; 34% in 1994; 32% in 2003). It has only become a majority opinion since 2010, following Sarkozy’s attempts to confuse immigration and national identity. Since then, it has been supported by 59% of French people in 2010, 63% in 2012 and 57% in 2022.

The constitutionality of the ban on the wearing of the veil in the street was revived by Marine Le Pen during the presidential debate on 20 April 2022, but there is no unanimity on this issue: such a ban cannot be motivated by the principle of secularism, which is not applicable to the public space. Instrumentalised for electoral purposes, it contributes, by a perverse effect, to adding water to the mills of Islamist machinations aiming to accuse France of Islamophobia.