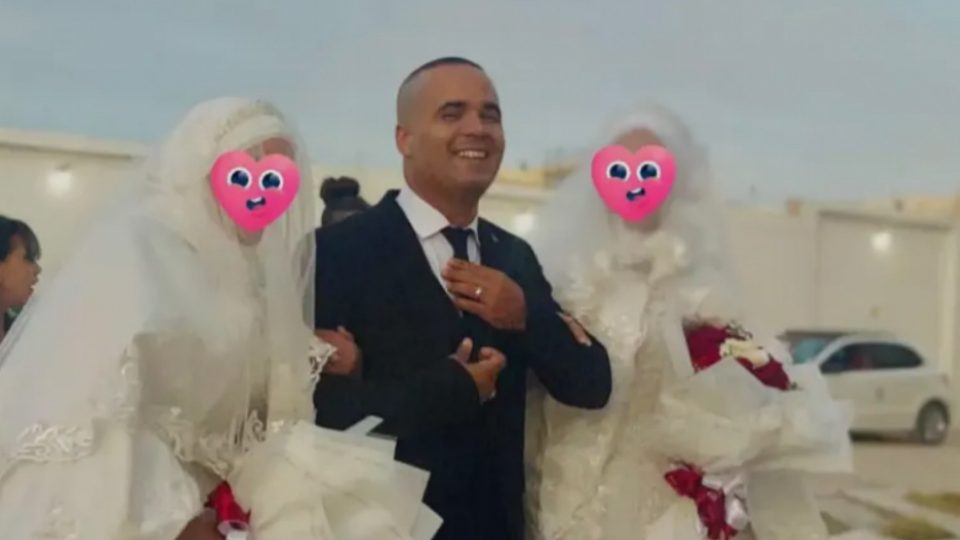 Imene and Hanene, the two happy women chosen by Rachid, long-time friends, were swimming in happiness, which was not exactly the case in Mohammed’s harem, which had difficulty in ensuring concord between its multiple halves. Moreover, the Prophet of Islam did not marry them on the same day, each one arriving at her own time, according to passions and political alliances. Rachid, known as “Skik-deux”, thus innovates in a spectacular way. At a time when people are living together, he boldly “deconstructs” polygamy, if we may borrow this expression from the irascible Sandrine Rousseau, who would surely see nothing but the best in it, as the affair takes place in a culture whose morals she is loath to judge. And as it is whispered that the two brides had been in love for a long time, all’s well that begins well in the best of Koranic worlds!

This edifying story is, no doubt, a chronicle in a country where boredom is as dense as the thick fog of socio-political glaciation. It tells the story of Algeria with more acuity and depth than the cameras summoned for Emmanuel Macron’s recent trip. After all, the relationship between Algiers and Paris is not the only issue in the lives of citizens on the other side of the Great Blue! Above all, day after day, night after night, shared for the happy “Skik-deux”, there is the life of Algerian men and women with each other, against or against each other.

This mixed union is a reminder that polygamy remains perfectly legal in the beautiful country of Boualem Sansal, Kamel Daoud, Yasmina Khadra, Amin Zaoui, Maissa Bey and other talented writers who are critics of Islam. The changes made to the family code under the reign of Abdelaziz Bouteflika, despite the publicity they received, did not touch the foundation of the verse.

This is an indication of the courage it took in 1956 for Tunisia’s neighbour Habib Bourguiba to promulgate the decree banning polygamy. The emancipation of Tunisian women – a model in the Arab world, even if it is being challenged today by the Islamo-compatible autocrat Kaïs Saied, who refuses to allow women to inherit equally – began with this abolition.

How to live free in a world where the male is protected by the law by offering himself two to four females, even “slaves”? Rachid’s blooming face and the erotic cooing, the pious encouragement as much as the invective and the dirty jokes that flew after his double wedding, say a lot about the state of Algeria, if not about the Algerian state based, among other things, on this iniquity. “No sociological or psychoanalytical theory is capable of analysing this new Algerian society in free fall on a societal, moral, religious, cultural and political level,” writes Amin Zaoui in despair. This marriage,” he continues, “is an indication of a social and moral madness that affects the founding values of our society and that will engender others that are more serious and stranger, and quickly…”

The values of all those who defied the Islamist terror between 1990 and 2000, in the only country where a popular and armed resistance to jihadism arose, were clear: Algeria cannot be mutilated, disfigured, raped, reduced to the barbarity of an emirate on the Asian borders. This war – which the regime likes to talk about much less than the Algerian-French war – has left one hundred and fifty thousand dead. Until now, in the name of reconciliation and civil harmony on which Bouteflika had based his power, the famous work of explanation and memory – which seems to obsess the official culture about France – has not been done. This is how Islamism returned to the country that had fought it. Oh, not political Islamism, exclaims the authorities. The rest, let’s see, is tradition!

The rest, i.e. behavioural Islam, has invaded and occupied Algeria. Just as the mosque in Algiers, desired by Bouteflika, the largest mosque in Africa and the third largest in the world, is devouring the pure sky of the most beautiful bay in the world, so Islam is devouring the roots of the rebellious, heroic Algeria that stood up during the ten years of bloodshed. We thus witness a devastating phenomenon: the denial by the victims or the children of the victims of the dangerousness of the codes that were those of the assassins. After all, what did the criminals rely on if not fatwas inspired by the Koran?

In September 1997, a few weeks after the massacre in Bentalha, about ten kilometres from Algiers, where 400 villagers were exterminated by the Armed Islamic Group (GIA), a religious decree signed by the GIA’s emir was found in the neighbouring camp: “In the name of Allah the merciful, the woman belongs to you when the Emir has given her to you. Do what you want with her. She is a jarya, a slave”. The whole of Algeria, where tens of thousands of women were abducted, raped, detained and murdered, had become a huge brothel. Today, the daughters and granddaughters of the survivors, the “dressed-undressed” [un-veiled women], whom the sinister Ali Belhadj, co-founder of the Islamic Salvation Front, called for to be punished, have something to worry about. Free hair has become “haram” again and the burkini is in fashion. Like polygamy.

It took 22 years for this to happen, the time it took for a new generation to rise up, to whom nothing was explained. Witnesses were afraid, the ‘repentant’ rebuilt their health and their bank accounts, imams were asked to avoid controversial subjects, historians bowed their heads or left. The regime wanted to last. After the extraordinary Hirak, stopped by Covid, everything changed in continuity. The Islamo-cultural glaciation froze deeper and deeper layers. The double life of “Skik-deux” in halal pink is above all an announcement of mourning!