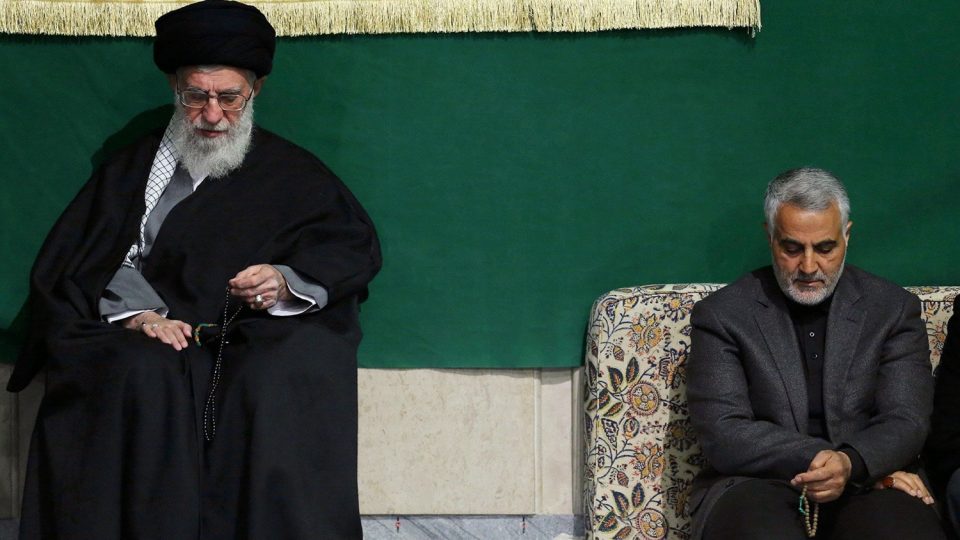 Despite the fiery war of words and threatening gesticulations promising to avenge his death, the elimination of General Qasem Soleimani, killed by an American drone on January 3, not far from Baghdad airport, is a relief for the Iranian regime! And not only for the reformist current led by President Hassan Rouhani and his Foreign Minister, Mohammad Javad Zarif.

Described sometimes, namely in the Anglo-Saxon media, as the number 2 of the Regime, general Soleimani was officially only the commander of a subdivision of the Pasdaran (Islamic Revolutionary Guard Corps), the Quds Force. A para-military unit formed under Khomeini and then responsible for “exporting the revolution,” this force has been transformed, especially since the coming to power of the ultra-conservative President Mahmoud Ahmadinejad (2005 – 2013), into a real “foreign legion” working to strengthen Iran’s military influence in the Middle East.
The so-called ‘Arab Spring’ revolutions and the fratricidal wars which followed were an opportunity for the Quds Force to transform this Iranian influence in the Middle East into a direct military presence, whereas until then it had operated by proxy via some 60 pro-Iranian Shiite militias essentially implanted in Lebanon and Iraq.
General Soleimani quickly established himself as the undisputed warlord in Syria and Iraq, then in Yemen alongside the Houthis. So much so that his name became the supreme icon of the Pasdaran, eclipsing those of Mohammad Ali Jafari, the commander-in-chief of the Pasdaran (2009 to 2019) and of Hossein Salami, who succeeded him in this function in April 2019.
This meteoric rise of general Soleimani has considerably strengthened the Pasdaran’s hold on the political and economic decision-making centres in Iran.
Under Ahmadinejad, himself a former Pasdaran officer, the Revolutionary Guard Corps was already described as a “State within the State”. Thanks, in particular, to its economic empire, articulated around Khatam-al Anbiya – a Trust which counts more than 2000 companies in the sectors of banking, oil, construction, tourism and telephony – the Pasdaran took over 57% of Iranian imports and more than 30% of exports (excluding hydrocarbons).
Under the aegis of general Soleimani, the income generated by the economic empire of the Pasdaran quadrupled in barely a decade. In 2010, this empire generated 12 billion dollars a year. Today, this figure exceeds 50 billion dollars. And this is thanks, essentially, to the informal economy, whose volume in relation to the official economy has increased from 20% to 42%.
And we owe this boom in the informal economy to general Soleimani, fuelled by trafficking of all kinds from Iran’s neighbours (Iraq, Syria, Lebanon, Yemen) where he reigns as an uncontested warlord. Traffic that passes through some sixty clandestine ports and a special airport to the West of Tehran managed by the Pasdaran and escaping all state control.
For this reason, the annual budget allocated to the Pasdaran has been increased by 55 billion riyals to reach 255 billion riyals in 2019, when the budget of the regular army has been reduced to 102 billion riyals and the overall state budget has been cut by almost 50%.
This “vampirization of the Iranian economy” by the Pasdaran has not failed to exacerbate the animosities against general Soleimani at the very heart of the mullahs’ regime, which is facing a growing social revolt precisely because of the deterioration of the economic situation. Because in 2019 the country suffered a terrible decline of -3.6% (compared to a growth of 1.5% in 2018), which caused a rise in inflation of more than 40% and inflated the number of Iranians living below the poverty line by more than half.
However, the reasons for the unspoken but very real relief of the various clans of the Iranian regime following the elimination of general Soleimani are not limited to economic factors alone. Because, strengthened by the impressive military influence that he had acquired and the huge war treasure that he had accumulated, the powerful general believed that he was able to free himself from the authority of the government (we remember the humiliating episode that he inflicted on the Minister of Foreign Affairs, Mohammad Javad Zarif, in February 2019, provoking his resignation, which was later refused by President Rohani).
And, as a final sacrilege, general Soleimani allowed himself to defy the authority of the old Supreme Guide, Ayatollah Ali Khamenei, by taking the initiative to order the attack on the Saudi oil sites of Abqaiq and Khurais in September 2019, without even informing the Guide’s Office in advance.
In doing so, general Soleimani crossed the final red line, which united against him the numerous and divergent clans of the Iranian mullahcracy and gave the Americans the implicit green light to eliminate him, without any real fear of reprisals on the part of Tehran!