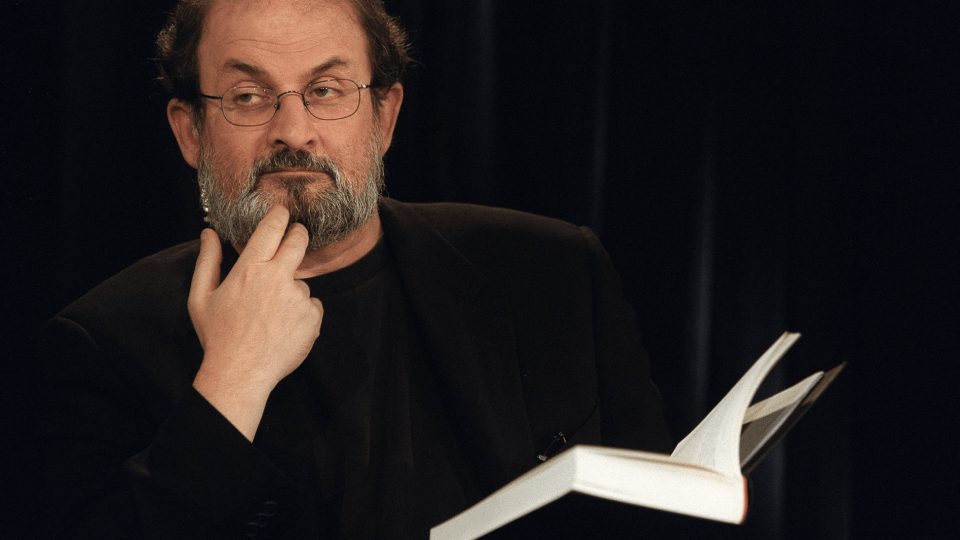 The writer survived. Millions of free consciences around the world are anxiously and hopefully awaiting news of his recovery. On the contrary, millions of other individuals, in whom the impulse has replaced the conscience, celebrate the cutthroat. In Tehran, the newspaper Kayhan, the official mouthpiece of the ayatollahs, exalts itself: “Let’s kiss the hand of the one who tore the neck of the enemy of God with a knife!” In Beirut, the press close to Hezbollah praises “A Lebanese hero”. This is no more surprising than the clamour of joy in Pakistan. But there is also that which, at the heart of our societies, swarms, grimaces and gives thanks to fury.

Hadi Matar burst onto the scene of a literary conference in peaceful Chautauka County, New York. The reverence for words that kill and their bloody initials has been spreading its kingdom for over two decades in the soft underbelly of the West. In reaction, this civilisation that proclaims itself to be the civilisation of freedom – it is, indeed, the only livable way of life – has produced only weak words, haggard, erratic reactions. In the short term, they can be compared to the level of security relaxed around Salman Rushdie. In the long term, we must remember their historical ineffectiveness. Thus, more than thirty years ago, there was no real Western reaction to the war between the words of death and those of life in Algeria, bloodied by the jihad between 1990 and 2000. Salman Rushdie, whom I had the honour of interviewing in February 2006, did not mention this country by chance during our interview: “The revolt of the Muslims has already happened. In Algeria.” At the time, the writer was fervently hoping for a great awakening while being tragically aware of the solitude of free beings, wherever they live. “The world has not heard me”, he said.

Year after year, however, horror followed horror. Always, the words of life were found under the knife, the sabre, in the sight of the machine gun, on the edge of the mass grave. In Algeria, the great massacre began with the liquidation of journalists, artists, teachers and professors. Let us remember the premonitory cry, the challenge and the SOS of the journalist and poet Tahar Djaout, assassinated on 26 May 1993 in Algiers: “If you speak, you die. If you remain silent, you die. So say and die.”

The frightening Algerian episode seemed to end in the early 2000s. Twelve years later, the France of living words was struck back. The Jewish children and teacher of the Ozar Ha Torah school in Toulouse in 2012, killed at point-blank range by Mohamed Merah, like the soldiers of Montauban who had the mistake of believing in the words of the Marseillaise. The journalists of Charlie Hebdo in January 2015. In November 2015, the youth of the Bataclan and the Parisian terraces, guilty of sharing the music and words of a sacrilegious happiness. In October 2020, the murder of Professor Samuel Paty. A humble passer of words. One forgets, inevitably, in this litany of pain. Mila, the young girl who also claimed the right to say: she survives like a shadow. Her lawyer, who is also a formidable writer, a master of words, Richard Malka, is under police protection. On the other side of the Channel, J.K Rowling is now under threat. The creator of Harry Potter, as soon as the attack on Rushdie was announced, expressed her support for the victim.

With every hour that passes, with every dawn that seems to rise brightly, we forget that hundreds, thousands of people are in danger. That millions of pages are doomed to be burned, just as the Nazis, during the Cristal night, burned the books of Jewish authors before burning the Jews. The list of targets of Islamo-Nazism is endless. For its executioners, its militiamen, its shareholders, its officials, its networks, its influencers, and finally its state powers have a precise objective: the list will never be closed. Nothing will ever be closed, neither the fatwa against Rushdie nor the extension of the domain of death, aided, as a bonus, by the extension of the domain of collaboration.

Of course, in the instant following an attack, the condemnations that fly in our gentle societies, especially in France, seem unanimous. The extreme left, which for so many years has had the eyes of Chimène for the Muslim associations linked to Salafism, is silent for a moment. It’s time to lament. But also, insidiously – because Islamo-leftism does not want to lose its south to the relativization of threats. Obscurantism is said to be equally distributed among all religions, and it would be wrong to point to one that is more murderous than another. Yet who is killing whom?  Who is condemning whom? Who is orchestrating the great concert of chaos, from the streets of Karachi and Tehran to those of Birmingham in 1989, the year of the fatwa, until 2022, over the course of these thousands of days spun into drops of blood?

Death, however, will have no empire if, like Salman Rushdie, with our humble means, wherever we are, whatever we do, we keep writing the word Resistance.