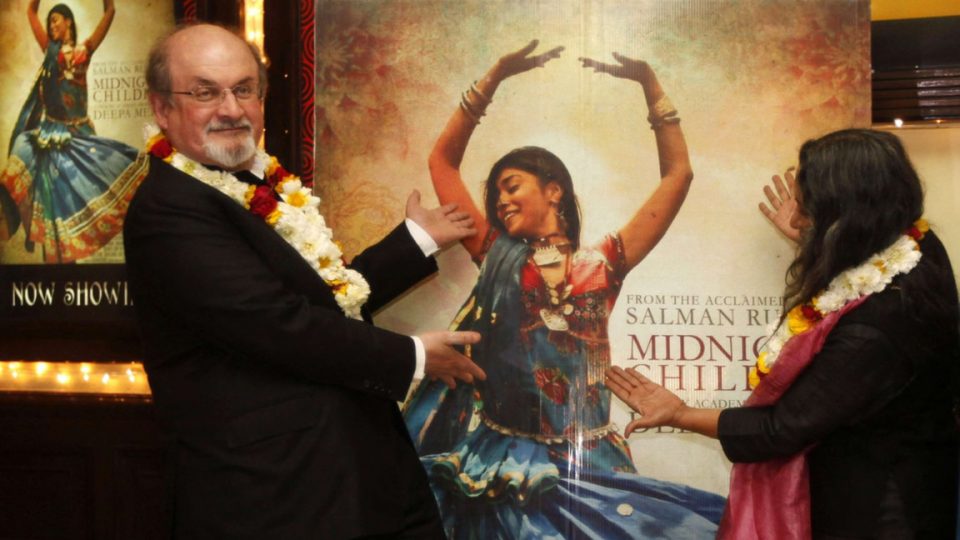 Like Salman Rushdie, I think that “if I were asked to give one short sentence about religion, I would say: I am against it”! Not because the problem is religious faith itself, but because “from the beginning, men have used God to justify the unjustifiable”.

Like Salman Rushdie, I consider that “freedom of expression is the whole, the whole story”, that it “is life itself”, that “without the freedom to offend, it ceases to exist”.

Like Salman Rushdie, I fear that “if the creative artist worries whether he will still be free tomorrow, he will not be free today”. Therefore, we must not “allow religious hooligans to limit thought”.

Like Salman Rushdie, I argue that “to criticise these forces is not to criticise Islam”, that “to remain silent [in the face of Islamist terror] does Muslims no favours”, for it is precisely for this purpose that “a new word has been invented to enable the blind to remain blind: Islamophobia”. And that in truth “fighting extremism, I repeat, is not fighting Islam. On the contrary. It is to defend it”.

Does this mean, however, as the proponents of political-intellectual “no-vagrancy” and other Islamo-leftists like to repeat, that there is no problem, in itself, with Islam/in Islam?

It is clear that beyond the murderous excesses of Islamism, an intellectual tension has spread in the Muslim world over the past thirty years, with the advent of what was then called the Sahwa (the awakening). It attempts to banish not only critical thinking, which was still in vogue some twenty years earlier – thanks to the rationalist intellectuals of the Egyptian Nahda (which also means awakening!) – but also any form of thought or artistic production of a satirical, humorous or protest nature.

Salman Rushdie described this tenseness of Muslim brains and minds so well – with the immense humour that he has never ceased to use, for more than three decades, as a bulwark against the terror and barbarism that were lurking around him – when he said that “if Woody Allen were a Muslim, he would be dead by now”!

And it is from this intellectual tension, this Pavlovian rejection of any criticism of Islam – which can also be found among secularists, “liberals” (in the Anglo-Saxon sense of the word) and even among certain Christian intellectuals in the Arab world! – that religious hooliganism feeds on.

Like Salman Rushdie, I see the rise of this kind of hooliganism as being due to the fact that “Islam has a problem with modernity”. Of course, this has not always been the case. One need not go back to the golden age of Averroist rationalism to see this. Barely half a century ago, at the end of colonialism, the Muslim world was thirsty for freedom, progress and modernity. But “the so-called leaders of contemporary Islam have succeeded in destroying a pure, open, colourful Islam, where people of all origins coexisted” (see the interview with Salman Rushdie by Martine Gozlan, page 14).

And like Salman Rushdie, I think that “it is very important to understand that there was another Islam”, that in order to fight against fanaticism, we must “first resurrect the nostalgia, then the vitality”. For, in the “Satanic Verses” affair – as in the long list of persecutions inflicted on free thinkers in Islam since its origins – the real fault line is not so much between the Muslim and the Other. It is within Islam itself. And opposes rationalist free thought to obscurantist intolerance.

In his novel “Two Years Eight Months and Twenty-Eight Nights”, Salman Rushdie brilliantly illustrated this age-old confrontation between rationalism and “religious hooliganism” in Islam, under the guise of a fantastic allegory opposing the “Duniazat”, descendants of Averroes, the great Andalusian rationalist philosopher, and the “bad Jinns”, disciples of his sworn enemy, Imam al-Ghazali, the master thinker of Islamic obscurantism throughout the ages!

And it was indeed a “Duniazat” who was stabbed on August 12 in Chautauqua, New York. For Salman Rushdie’s struggle is the struggle of us all against obscurantism and intolerance in Islam. And this fight has not changed at all since the battle between Averroes and the followers of al-Ghazali: Tafkir (rationalist thought) versus Takfir (excommunication)!