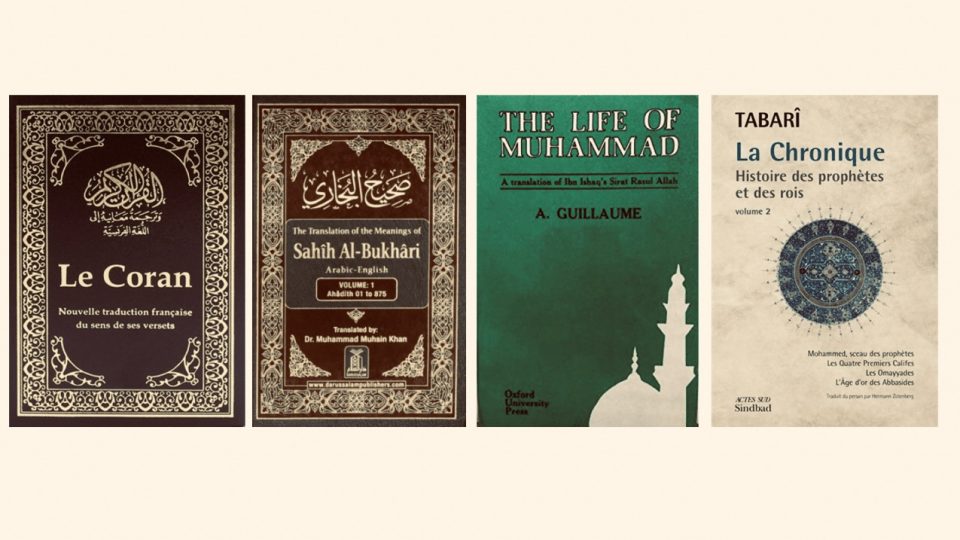 This episode of the “Gharaniq” dates back to 8 BC. Fearing that the rise of the new Islamic religion would challenge their leadership of the other Arabian tribes, the leaders of Quraysh, who controlled Mecca, proposed a compromise to Muhammad: The Quraysh agreed to embrace his religion, provided he retained a role as deities to their three favourite goddesses al-Lat, al-Uzza and Manat [among 360 idols then housed in the “house of the black stone” (The Kaaba)].

After consulting with the Archangel Gabriel, Muhammad returned to the Kaaba and recited the Sura of the Star, incorporating verses referring to al-Lat, al-Uzza and Manat as “sublime ‘Gharaniq’ whose intercession with Allah is desired”.

Since the “Gharaniq” could fly at great heights, the Muhammadan metaphor suggested that al-Lat, al-Uzza and Manat could approach the throne of God and that Muslims were allowed to worship them as mediators with Allah.

Approving this compromise, the chiefs of the Quraysh prostrated themselves at Muhammad’s side as a sign of submission to Allah. However, the Prophet soon retracted his statement, officially following the reprimands of the Archangel Gabriel, reproaching him for having distorted the message he had transmitted to him from Allah. But it was also a question of cutting short the discontent of the Prophet’s first companions, who urged him to consult the Archangel Gabriel again, because they considered this compromise as a concession to the polytheism of the Quraysh and, therefore, a departure from the founding principle of Islam as a monotheistic region.

Muhammad then corrected the verses in question. And a new sura in the Koran (sura al-Hajj) clarified matters, explaining that Satan had intervened to infuse the Prophet with impure words.

Bukhari: “the pagans prostrated themselves with him”

This episode has not been obscured in any way in the Koran and the main works of Muslim tradition. Thus, in the ‘‘Hadith of Bukhari’’, a work considered by all Muslims as one of the two reference collections [the second being that of Muslim] of the Sira, the episode of the prostration of the chiefs of Quraysh, when Muhammad recited the Sura of the Star, is mentioned in these terms (Volume 6, Book 60, Hadith n°385): “Related by Ibn Abbas: the Prophet prostrated himself after reciting Surat-an-Najm [The Star, Sura 53] and all the Muslims, and the pagans and the Jinn and the human beings prostrated with him.”

The Koran, Verse 52, Sura 22: “God abrogates what the devil suggests”

Bukhari does not openly mention the satanic interference that caused the non-believers to prostrate themselves with Muhammad. However, there is a verse in the Koran that explicitly relates this incident in which Satan spoke through Muhammad’s mouth. It is verse 52 of Sura 22 (Sura al-Hajj): “We sent no messenger or prophet before you who did not recite [what was revealed to him] without the devil trying to intervene [to sow doubt in the hearts of people about] his recitation. God abrogates what the devil suggests, and God strengthens His verses. God is All-Knowing and All-Wise.”

In his ‘‘Life of Muhammad’’, the historian Ibn Ishaq refers to Muhammad’s “temporary concessions to polytheism”. “The prophet, he writes, was concerned about the welfare of these people (the Quraysh pagans) and sought a way to attract them. Finally, it was the leaders of the Quraysh who came to him with a proposal. They offered him women and money, and were even prepared to crown him king, if in return he agreed to their conditions. «This is what we ask of you, Muhammad: stop insulting our deities and do not speak ill of them. If you agree, we offer you a possibility that will be to your advantage and to ours.» «What is it?» asked Muhammad. «You will honour our deities, al-Lat and al-‘Uzza, for one year, and we will do the same with your God the following year. » After initially rejecting this offer, Muhammad had a revelation, saying that Muslims were allowed to worship al-Lat, al-Uzza and Manat, the three favourite deities of the Quraysh, as mediators with Allah. The Quraysh were delighted and knelt with Muhammad and the Muslims before Allah after Muhammad recited his new revelation to them’’.

Tabari: “Satan came and put his words in his mouth”

In his famous Chronicle entitled “Stories of the Prophets and Kings”, the Muslim historian and commentator Tabari refers to the incident of the “Satanic Verses” as follows: “Then was revealed to the Prophet the Sura of the Star. He went to the centre of Makkah, where the Qurayshites were gathered, and recited this sura. When he got to verse 19: «What do you believe about al-Lat, `Uzza and Manat the third? Is it possible that God has daughters and you have sons? What a beautiful division of labour that would be…» Iblîs [Satan] came and put in his mouth these words, « These idols are illustrious deities, whose intercession must be hoped for. » The disbelievers [non-Muslims] were very pleased with these words and said, «It has happened to Muhammad to praise our idols and speak well of them.» The Prophet finished the sura, then he prostrated himself, and the disbelievers prostrated themselves after him, because of the words he had spoken, by mistake, believing that he had praised their idols. The next day, Gabriel came to the Prophet and said, «O Muhammad, recite to me the Sura of the Star». When Muhammad repeated the words, Gabriel said, «Is this not how I conveyed it to you? I said, “This division is unjust’’. You changed it and put something else in place of what I had told you.» The Prophet, frightened, returned to the mosque and recited the sura again. When he uttered the words, «And this division is unjust » the disbelievers said, «Muhammad has repented of praising our gods.» The Prophet was very worried and abstained from food and drink for three days, fearing God’s wrath. Then Gabriel conveyed to him the following verse: We have not sent a single prophet or envoy before you without Satan throwing through his wishes some sinful desire; but God brings to naught what Satan throws through, and He strengthens His signs”.

An “unthought” both visible and unnoticed in Islam!

Salam Rushdie did not, therefore, invent anything about this incident. It is a known and recognised historical fact in the Muslim tradition. It is not, in itself, a blasphemy or an attack on Islam and its prophet.

However, if the evocation of this episode, known as the “Satanic verses”, was able to provoke a worldwide polemic, it is because beyond the Hallal (licit) and the Haram (illicit), a sort of taboo hovers over a certain number of subjects and historical facts which have become both “visible and unnoticed”, as Salman Rushdie so aptly put it.

The passages evoking this type of taboo in the reference works of Islam have not been expunged, but they have become – over the centuries – of the order of the “unthought” in Islam, according to the formula of the illustrious Islamologist Mohamed Arkoun: facts which are not denied, the evocation of which is neither illicit nor blasphemous, but it is, nevertheless, agreed to avoid thinking about them!