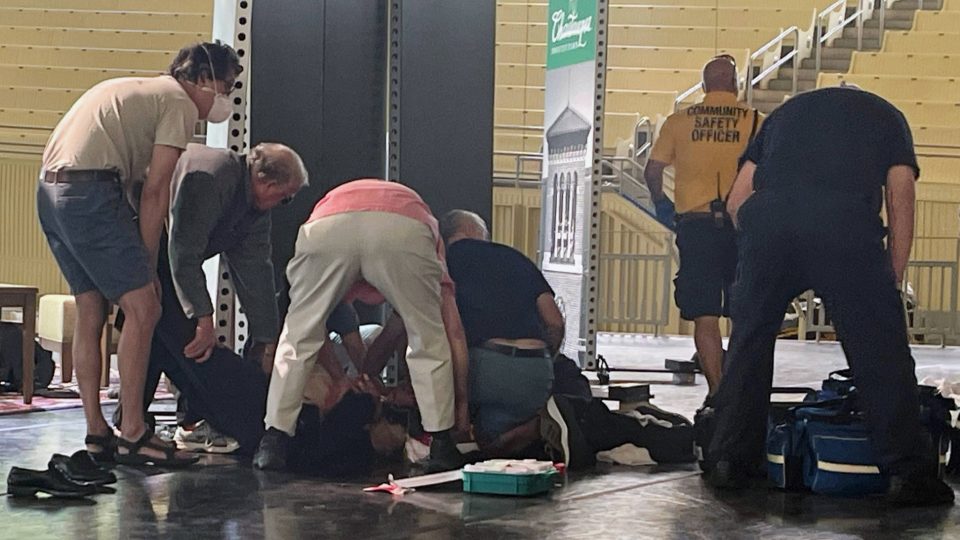 On August 8, Algerian novelist Anouar Rahmani was due to take part in the debate on freedom of expression, alongside Salman Rushdie and other persecuted artists, in Chautauqua, New York. He was in the conference room when the author of “The Satanic Verses” was stabbed. In this interview, conducted the day after the attack, he confides exclusively to Screen Watch about this painful ordeal.

– You were in the conference room when Salman Rushdie was attacked. Were you even invited to participate in the debates?

– I am a resident of the United States as part of a fellowship programme for the protection of persecuted artists. Last July, the City of Asylum, founded in 2004 by Henry Reese and his wife Diane Samuels, which describes itself as a “sanctuary for endangered literary creators”, invited me to take part in its annual meetings, along with Salman Rushdie and other artists of different nationalities.

I was very touched by this, because the author of “The Satanic Verses” is a symbol for any persecuted writer and even more so for me: like him, I was targeted by a fatwa. I say this in all humility, because the persecution that Salman Rushdie experienced is unparalleled and cannot be compared to my “small” case. For me, Salman Rushdie is a model of courage and resistance in the face of intolerance. I was therefore delighted to be able to meet him and talk to him. I felt a particular excitement…

Two themes were planned. The first was to be about artistic freedom in general. The second was entitled: The United States as a sanctuary for threatened artists. Salman Rushdie was to be interviewed by Henry Reese, before a second panel joined the debate. I was to be on it, along with three other persecuted artists from different countries.

– How did the assailant get into the conference room and reach Salman Rushdie so easily?

– When I arrived at the venue, I noticed that there were no heightened security measures. When I asked, I was told that this was Salman Rushdie’s own decision, as he wanted to be treated the same as all the participating writers. At the entrance, there was no metal detector or any kind of search. I remember that a policeman was present with a dog. However, the atmosphere was so relaxed and serene that some people in the audience played with the dog!

It has to be said that the place where the debate was held is special: it is a closed residence that you can only access with a badge. And the meetings we had to attend were strictly regulated. To attend, you had to register and buy a pass on the Chautauqua Institute website. As the number of places was limited, Salman Rushdie’s attacker had undoubtedly planned his attack well in advance.

– Tell us what you saw during the attack?

– No sooner had Salman Rushdie taken his place in the gallery, alongside Henry Reese, than the assailant came running up and pounced on him. The debate had not yet started and I was busy on my mobile phone. The ensuing hubbub caught my attention. As I looked up, I saw the attacker beating Salman Rushdie. At first I thought he was hitting him with his bare hands. The weapon he used to stab Salman Rushdie was not visible from where I was standing.

There was chaos in the room. The audience was screaming and running around. Without even thinking, I rushed to the podium, filming what was happening with my mobile phone. I later posted the video on my Instagram and many media outlets shared it.

As I approached the scene, I saw the assailant – a very slender young man dressed in black – on the ground and Henry Reese was grabbing his feet, pulling him away from Salman Rushdie. To get away from him, the assailant turned around and hit Reese several times, injuring him in the eye. People in the audience then rushed to the stand and managed to restrain the attacker.

– How did you feel after this painful ordeal?

– A huge shock! It brought back the trauma of the long years of persecution I experienced in Algeria. My heart goes out to Salman Rushdie, I hope he recovers quickly. We must all condemn this crime, whether or not we agree with his ideas and writings. Freedom of expression must be total and sacred. This applies to Salman Rushdie as well as to those who criticise him. Provided, of course, that criticism is exercised with respect and tolerance, without ever resorting to violence.

Anouar Rahmani, Algerian writer and human rights and LGBT activist, has been persecuted in his home country and targeted by a fatwa issued by a local Salafist preacher. He was also subjected to a multitude of legal hassles by the Algerian authorities. He ended up going into exile, settling in the United States.