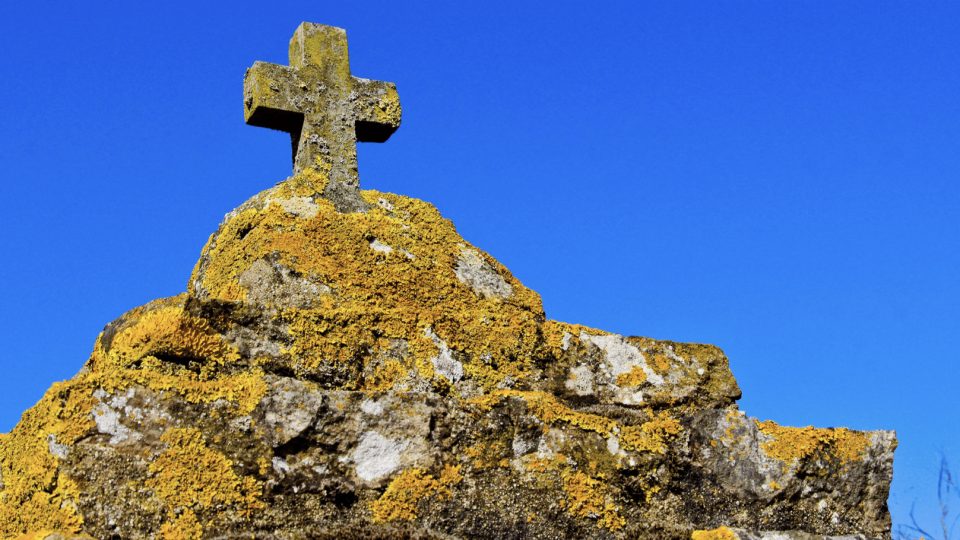 The specificities of the practising Catholic vote

In addition to this conservative trend, linked to the overall right-wing trend in the French electorate, there are factors specific to practising Catholics. These are reflected in an exacerbation of identity-related phobias. Thus, 50% of Catholics (59% of regular voters / 43% of occasional voters) consider the defence of the traditional family as a determining factor in their vote. Worse still, 61% of Catholics (74% of regular churchgoers / 51% of occasional churchgoers) place the defence of France’s culture and Christian roots higher than the fight against racism, anti-Semitism and discrimination (46%) or the fight against community and identity-based withdrawal (43%).

This resurgence of identity-based phobias has its roots in the trauma of certain terrorist attacks, such as the slaughter of Father Hamel in Saint-Étienne-du-Rouvray or the attack on the Basilica in Nice. It is also deliberately fed, as Jérôme Fourquet explains (see page 8), by the “civilisational fibre” of the Christians of the East, used by certain candidates to send a subliminal message to French Catholics suggesting that the fate of the Christians of the East would be a foreshadowing of what could happen to them in France within the framework of a civilisational conflict! 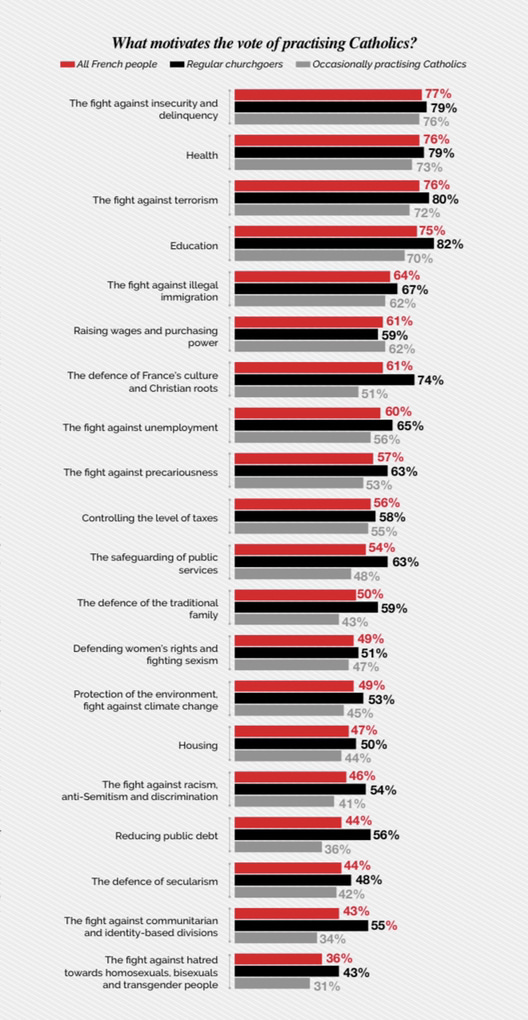 No, Zemmour is not favoured by Catholics!

Despite the considerable efforts he has been making for months to win over practising Catholics (over-mediatised trip to Armenia, over-the-top dramatization of his installation of a nativity scene at Christmas, fierce defence of traditional values and the Catholic identity of France, etc.), Eric Zemmour has not achieved the lightning breakthrough he was hoping for among the Catholic electorate: the polemicist has only won over 15% of them!

This modest score is explained by the shock caused by some of his outrages on Pétain and other dark episodes of French history, but above all on migrants, whom he rejects and stigmatises, whereas Pope Francis recommends adopting “behaviours of humanity and generosity” towards them.

The French Bishops’ Conference even published, at the beginning of January, a booklet entitled L’espérance ne déçoit pas(Read page 10), warning Catholic voters against “fear [which] is always a bad advisor”, recommending them to “make sure that no one takes sides with the humanitarian tragedies that are constantly taking place before our eyes or a few miles from our shores”

Another important fact is that among Catholics, as for the French as a whole, Zemmour’s electorate has the same profile: mostly male, active, between 35 and 49 years old, belonging to the higher socio-professional categories. However, this profile is far from being the majority among practising Catholics! 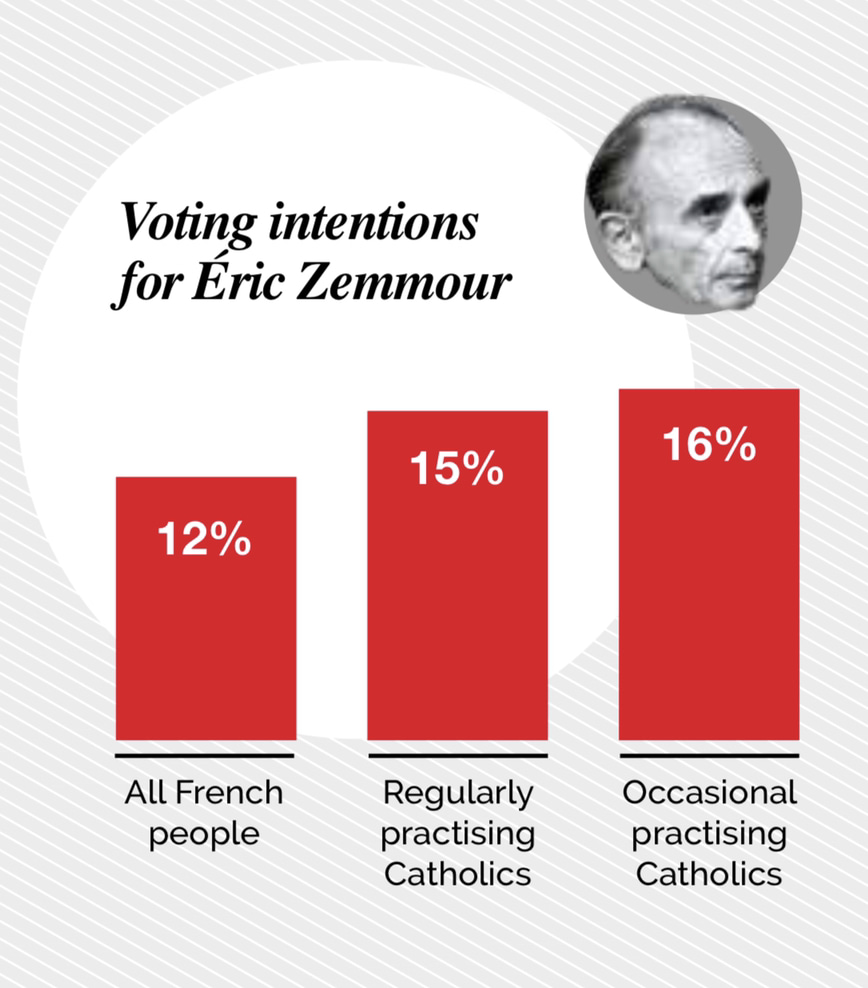 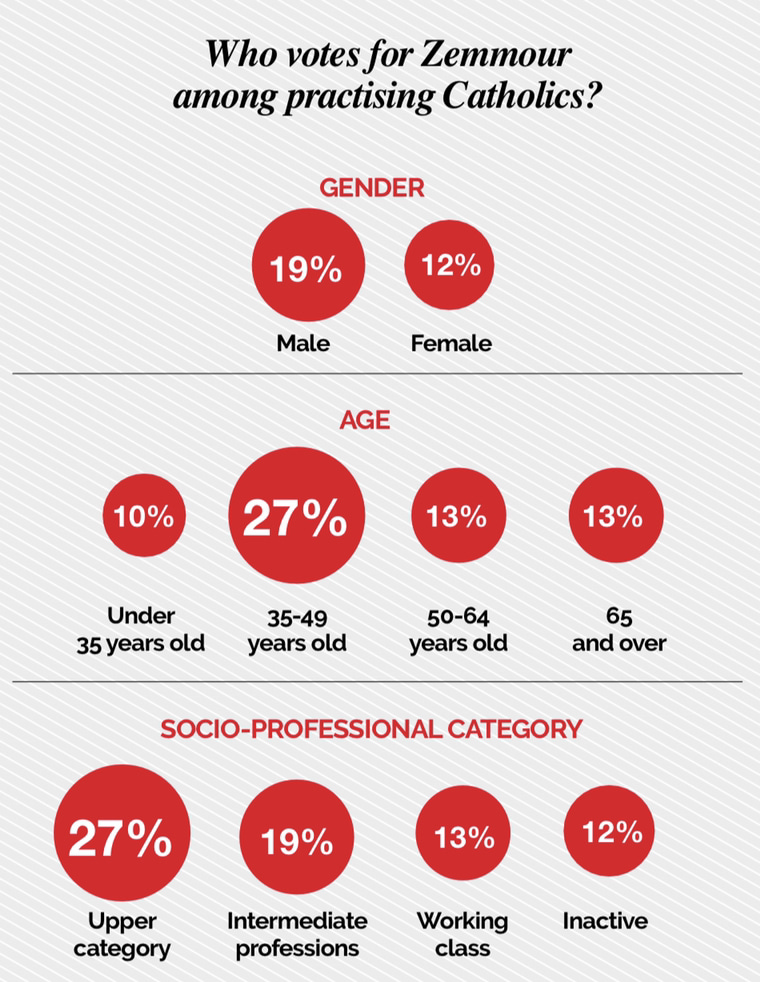 Macron-Pécresse: a duel by proxy

Emmanuel Macron and Valérie Pécresse are neck and neck among practising Catholics. They each account for a quarter of this electorate, with a bonus for Pécresse (26%) among regular churchgoers, who are more conservative, and for Macron among occasional churchgoers (28%), more sensitive to liberal ideas.

This deceptive equality is actually the result of a clear downgrading of the candidate of the traditional right among the Catholic electorate. It is essentially a collateral damage of the emergence of the Zemmour phenomenon: Pécresse received 25% of the Catholic vote, against 46% for the LR candidate, François Fillon, in 2017. That is to say a 21% drop. However, 15% of these votes lost by the LR candidate are captured by Zemmour. When Emmanuel Macron (19% in the first round in 2017) only increases by 6% and Marine Le Pen (15% in 2017) only gets 3% more.

This is why, in order to move the lines between Macron and Pécresse, it will not be so much the direct capture of Catholic votes that will be decisive. But rather a duel by proxy, arbitrated by the national and/or identity-based right.

If Pécresse resists Zemmour’s and Le Pen’s attacks on her Catholic electorate, she will be able to reach the second round, provided that she manages to gather more of the centre-right.

On the other hand, if the LR candidate does not manage to stop the siphoning of her Catholic votes by the national right and/or the identarian right, a “bearish logic” will be set in motion. This will not be limited to the accentuation of the diversion of conservative fringes of the Catholic electorate from the traditional right to the benefit of the national and/or identity-based right. It will also give rise to a logic of useful vote in favour of Macron among the current Catholic supporters of Pécresse.