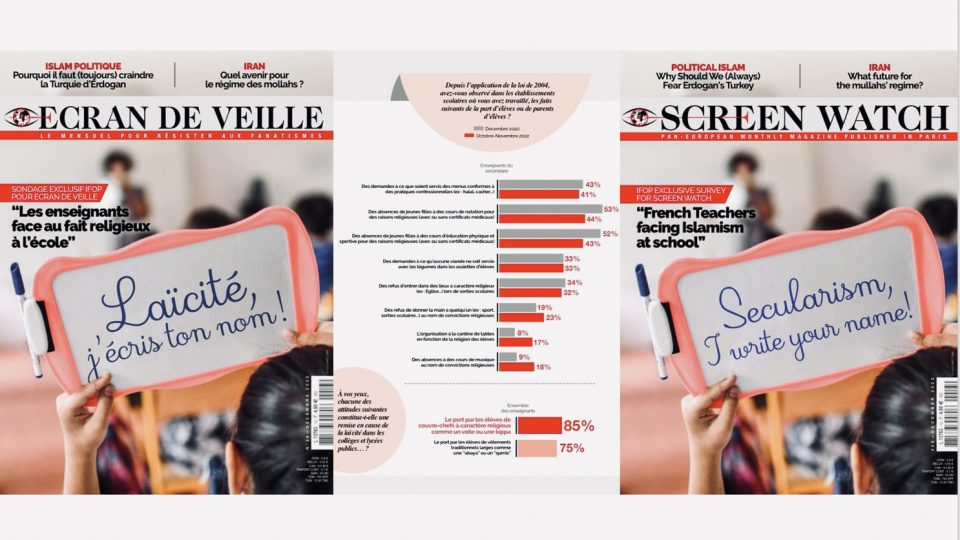 Two years after the death of Samuel Party, who was beheaded for showing Mohammed cartoons to his pupils during a lesson on freedom of expression, 77% of teachers believe that the Ministry of Education has not learnt the necessary lessons from this assassination and from the way the school institution handles events relating to attacks on secularism and religiously motivated violence. For this reason, only 51% of teachers approve of the actions of the current Minister of Education, Pape Ndiaye, with regard to secularism and the management of religious issues in schools. 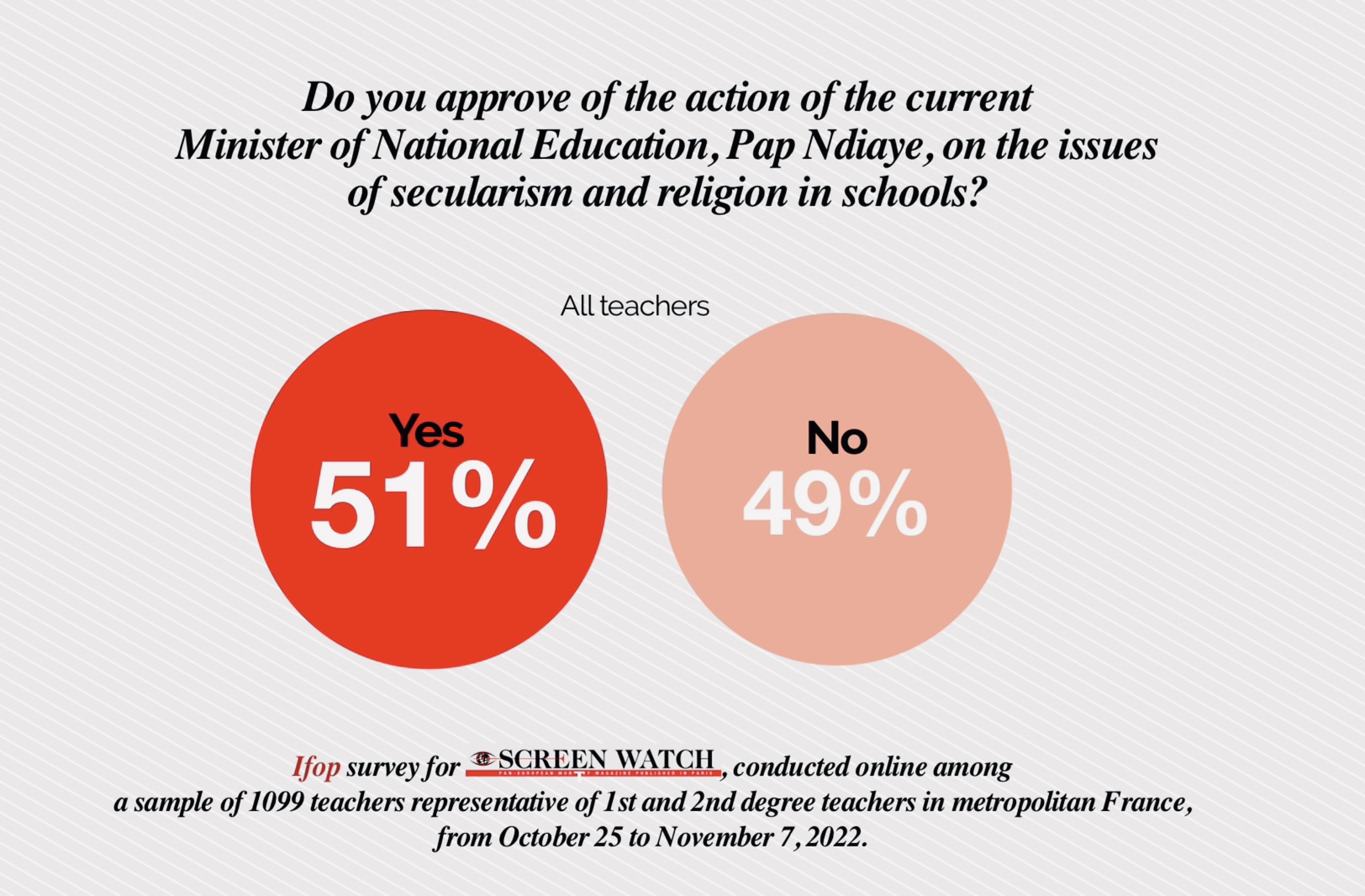 The survey paints a very bleak picture of the state of mind of teachers. For example, only 61% of schools organised “times of tribute to Samuel Paty” in mid-October, as requested by the Ministry of Education. And during these tributes, 21% of teachers observed contentious behaviour from pupils: 17% of cases involved “religious, political or cultural justifications for the crime committed against Samuel Paty”, 17% refused to take part in the times of tribute and 15% were insulted or provoked during the tributes.

With regard to violations of secularism, 62% of teachers (compared to 61% in 2020) have encountered cases of pupils expressing religiously motivated objections. For this reason, 79% of teachers acknowledge that they are aware of a number of conflict situations. Three of these are directly linked to the assassination of Samuel Paty: 47% are afraid to talk about the motives for this assassination, 28% are afraid to work in a school named after Samuel Paty and 25% in a school named after him. In the other three cases, the situations feared by teachers concern the presentation of caricatures of religious figures (62%), dealing with cases of pupils who want to wear traditional or religious dress in class (59%) and tackling certain historical subjects, such as the Shoah, the Israeli-Palestinian conflict or colonisation (43%).

The situation is so tense that 54% of teachers admit that they self-censor their teaching “in order to avoid possible incidents caused by certain students”! 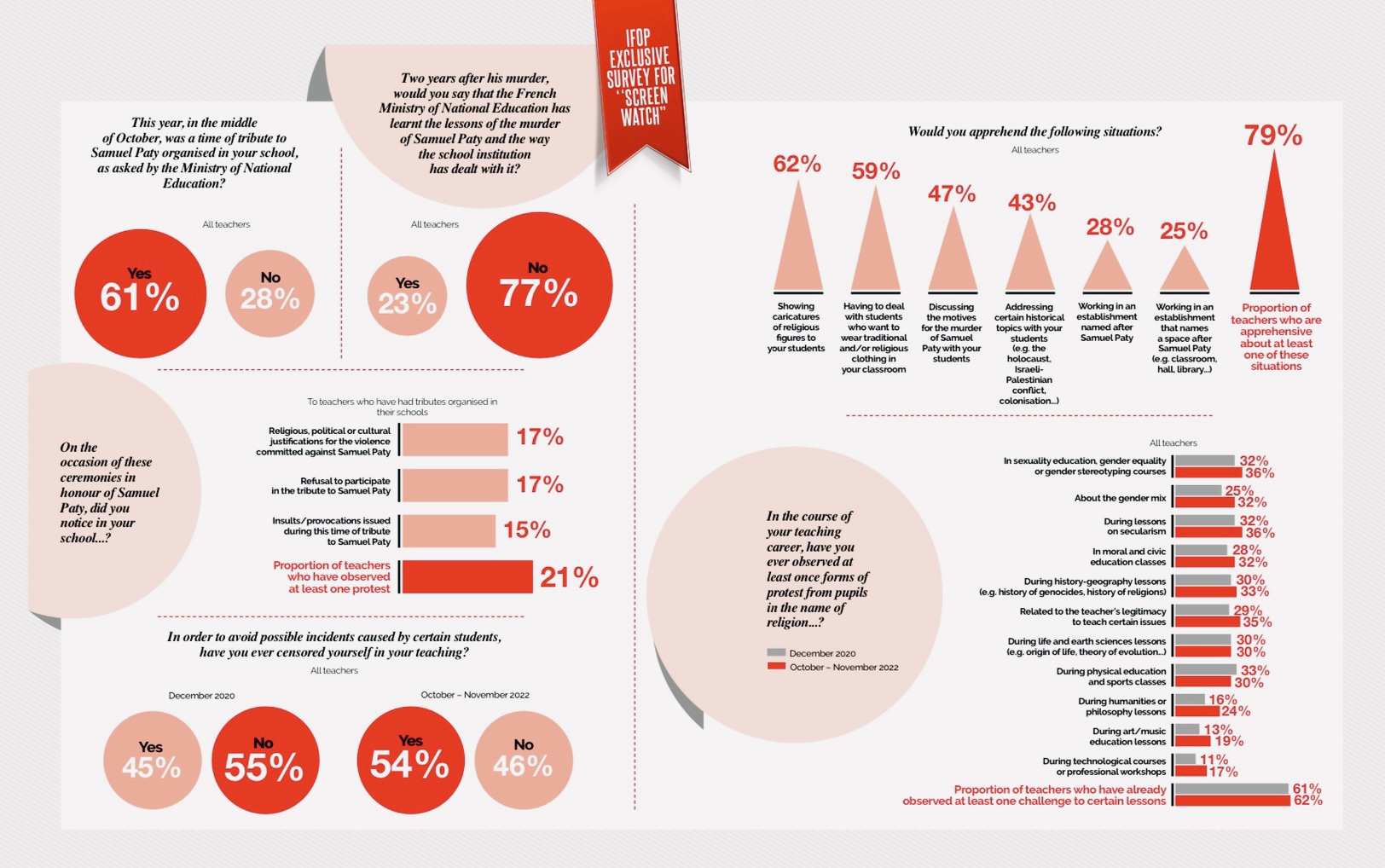 Another sign of teachers’ lack of support for the current Minister of Education’s action on secularism: on 16 September 2022, the Ministry sent a note to the rectors giving school heads a “margin of appreciation” to judge the religious nature (or not) of clothing such as “abayas” (long dresses from the Middle East for women), “qamis” and “djellabas” (long tunics for men) or bandanas (for the hair). However, to the question: “In your opinion, are traditional loose-fitting garments such as the ‘‘abaya’’ or ‘qamis’ ‘religious’ that have no place on the premises of a public school”, the overwhelming majority of teachers (68%) replied in the affirmative. And only 15% consider that these are ‘cultural’ outfits that can be allowed in public schools.

These figures indicate that the subject is hardly debated by the teaching profession and does not require a “margin of appreciation” as the Ministry’s note seems to suggest. Another indicator of teachers’ unanimity on this subject: in the list of attitudes considered to undermine secularism, 75% of teachers mention the wearing by pupils of large traditional garments such as an ‘‘abaya’’ or a “qamis”, just behind the wearing by pupils of religious headgear such as a veil or a kippah (85%). 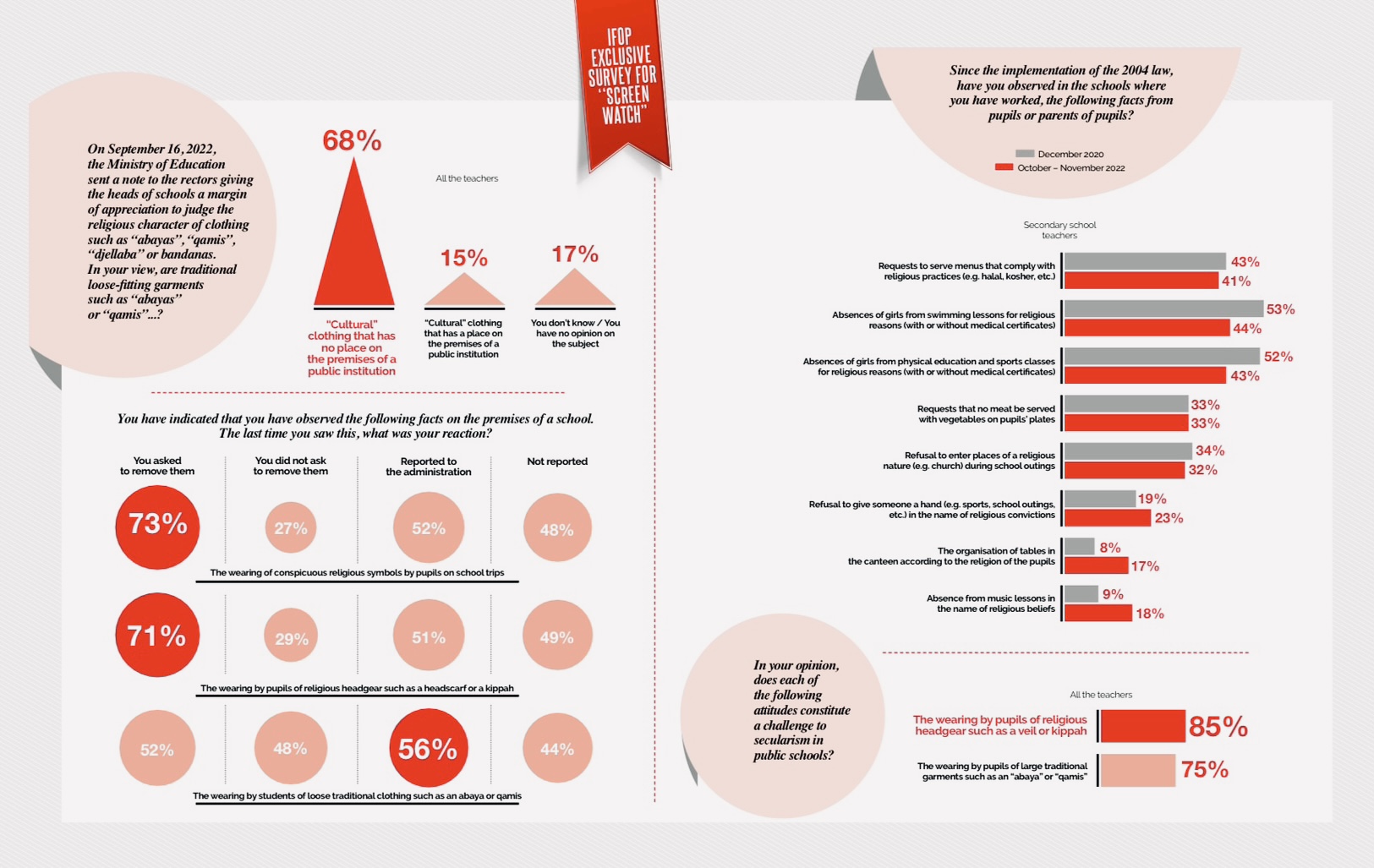 The final finding of our survey is that the number of incidents of infringement of secularism reported to the school administration is much lower than the actual number of cases reported by teachers. As regards the wearing of conspicuous religious symbols by pupils on school outings, only 52% of teachers claim to have reported such incidents to the administration. Only 51% had reported cases of pupils wearing religious headgear such as a headscarf or a kippah. And when it comes to students wearing traditional loose clothing such as an ‘‘abaya’’ or “qamis”, only 56% reported this.