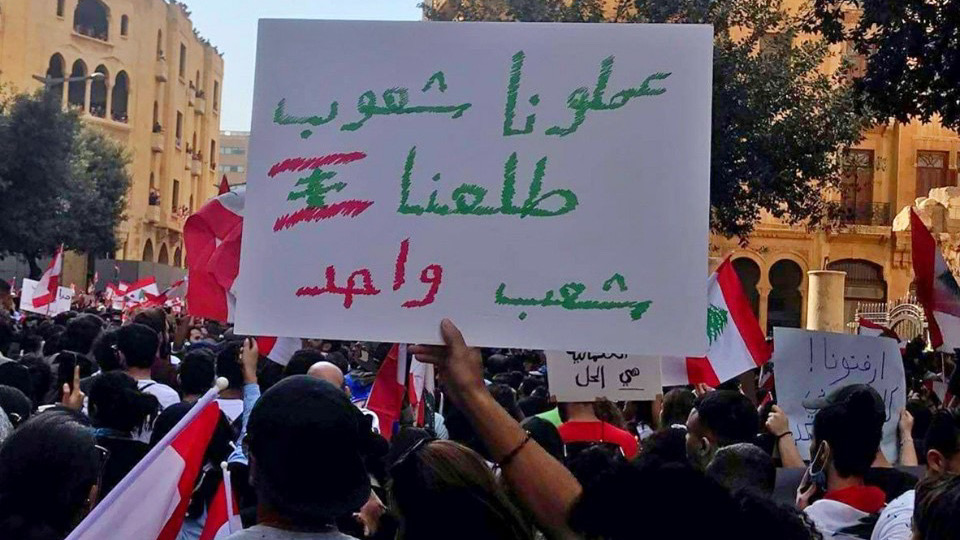 Everything seemed calm on Hamra Street, the main artery in central Beirut, on Thursday, October 17. When, suddenly, a horde of young hooded bikers invade the street and destroy everything in their way. Shops are spared, but road signs and traffic lights are ripped off, garbage cans spilled or burned. And a little further down, still in the city centre, a few bank branches were targeted.

On the terrace of the Horse Shoe, a famous café known as a landmark of the secular and left-winged intelligentsia, the customers have remained almost unchanged. And this despite the fact that this café has repeatedly changed ownership and name and has been the target of numerous attacks, including an ISIS attack in January 2017.

In the distance, I recognize Mahmoud Mroueh, a former journalist with the legendary Es Safir newspaper, who died in 2016, whose slogan was “the voice of the voiceless”. He explained to me that, a few hours earlier, following calls made on social networks, young people who had been overwhelmed by the economic crisis, accentuated by the rampant corruption, had met on the Fouad Ch’hab bridge, known during the civil war as the Ring, because it represented the dividing line between East and West Beirut.

The symbol is very strong for this youth who want to be “united in citizenship, rejecting tribal and confessional barriers”. However, no one could imagine that the cry of anger of these few thousand young people calling for the overthrow of the “government of the corrupt” would spread, the next day, not only to other parts of the capital – in particular to Martyrs Square, the center of political and social protest movements – but also to all the cities and provinces of the country of the Cedar.

On Sunday, October 20, on the fourth day of protests, the number of demonstrators peaks at more than one million, out of a population of 6 million. And very quickly, the anti-corruption grumbling turned into an uprising against the “confessional sharing” regime, in force in the country since the Taif Agreement, which led to civil war in 1989.

This emancipatory impulse gave rise to a new spectacle, which no one could predict or even imagine: In Jounieh, the Chique Christian suburb, in the north of Beirut, young demonstrators are conspiring both with President Michel Aoun and his Christian rival Samir Geagea; in Shiite cities in the south, such as Nabatieh, the offices of several Hezbollah MPs are ransacked; and in Tyre, the baltaguia of the irremovable Speaker of Parliament and leader of the Amal movement, Nabih Berri, were overwhelmed by thousands of young Shiites attacking the giant portraits of their leader that adorn the city’s main squares.

After a first abortive and violently repressed revolt in August 2015, Lebanon finally holds its anti-confessional revolution. “It is not surprising,” explains Pierre Abi Saab, editor-in-chief of the newspaper al-Akhbar, “because behind the corrupt system with which the insurgent youth wants to fight, there are the same ten “big families” who hold the “confessional regime”. And to the “traditional dynasties” (the Hariri among the Sunnis, Berri among the Shiites, Joumblatt among the Druzes, Gemayel or Frangié among the Christians…), “who share a tribal and confessional leadership inherited from generation to generation, has been added a “new caste” of businessmen and crooked politicians, who are often the business partners, see the sponsors of the “old barons” of the confessional system…”

Also at al-Akhbar newspaper, we are attending an editorial meeting to which two political figures who seem to be in opposition are invited: Charbel Nahas and Abdelhalim Fadlallah. The first is a figure of the secular left, a former Minister of Labour, leader of the trans-community party “Citizens of a State”. The second is an economist, a member of the political leadership of Hezbollah.

Both men acknowledge that the unhealthy mix of gender between politics and business has given rise to “incestuous alliances” that have brought the country to the brink of economic collapse and social implosion. Agreeing that the possibility of an early legislative election, mentioned by Prime Minister Saad Hariri, would only regenerate the old confessional system. They diverge, however, on the nature of the alternative to be built.

Nahas calls for a “transition period”, with a roadmap for the resignation of the government, the dissolution of parliament and the appointment of a “government of powers” with special powers, to put in place a plan to rescue the economy, independent monitoring bodies to effectively fight corruption and constitutional reform to get out of the confessional system.

Fadlallah considers that the greatest danger would be the institutional vacuum. He welcomed the cross-confessional momentum of the youth revolt, but called for a gradual political evolution, believing that “breaking everything at once would be a leap into the unknown with risky consequences”. To which Charbel Nahas replies, cordially but firmly, that “Hezbollah does not really want to leave the confessional system, because it is itself a confessional party, armed and linked to a foreign country which is Iran”.

In an equally cordial tone, Fadlallah replied that “Hizb’s motivations are not religious, but political. As it is the majority political force, they are anxious not to upset the current political balances, for fear of finding themselves in the dominant and hegemonic position that once belonged to Syria. This would be a political mistake that the Hizb does not want to avoid at all costs…”

an equally cordial tone, Fadlallah replied that “Hizb’s motivations are not religious, but political. As it is the majority political force, they are anxious not to upset the current political balances, for fear of finding themselves in the dominant and hegemonic position that once belonged to Syria. This would be a political mistake that the Hizb does not want to avoid at all costs…”