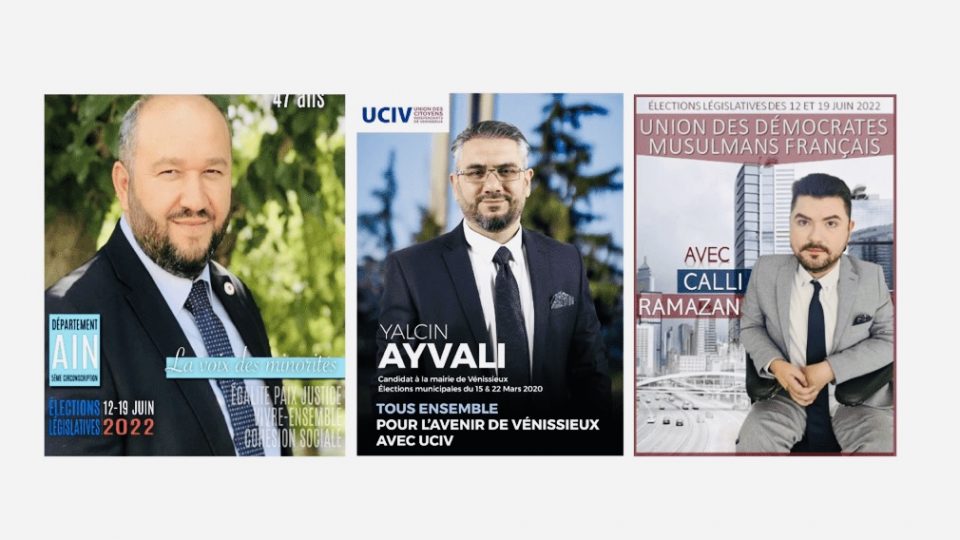 French legislative elections: Erdogan has slipped into the ballot box!

In Germany, where three million Turks live, more than a million of whom have German nationality, Ankara has been trying for several years to influence elections by calling on voters with dual nationality not to vote for political parties deemed hostile to Turkey’s interests. Recep Tayyip Erdogan’s networks are also active in France, although much more discreetly, via the Council for Justice, Equality and Peace (Cojep), which presented – without much success – several candidates in the recent legislative elections.

The 5th constituency of the Ain department, including the town of Oyonnax, was particularly scrutinised because of the personality of the outgoing deputy, Damien Abad. President of The Republicans group in the National Assembly, he switched to Emmanuel Macron after the presidential election last April, becoming Minister of Solidarity and Disabled People. His candidacy for the legislative elections has also attracted attention due to the accusations of rape against him.

Political observers were less interested in one of his competitors, the candidate Celil Yilmaz, 47 years old, Franco-Turkish, executive at Turkish Airlines. His score in the first round of the legislative elections in this constituency (704 votes, or 1.95% of the vote) did not attract much attention. Celil Yilmaz, presenting himself as an independent candidate, wanted to carry “the voice of minorities” in order to defend “the French mosaic”. In his profession of faith, he denounced “the numerous stigmatizations and discriminations that citizens from diverse backgrounds encounter or may have encountered”. He deplored the “incomprehensible” rise of Islamophobia in France and in Europe. According to him, during Emmanuel Macron’s five-year term, citizens of the Muslim faith have suffered “unprecedented stigmatization”.

The same speech was made by Ozbay Pehlivan, 34 years old, another figure of the Cojep, originally from Valence. While defending “the values of the Republic”, he stigmatises “the Islamophobia that contaminates democracy”. He said that when he ran for the municipal elections in 2020, his candidacy would have triggered “an avalanche of hatred from the Armenian community”.

Unlike Celil Yilmaz, Ozbay Pehlivan was more colourful, running under the banner of the Union of French Muslim Democrats (UDMF). This label only allowed him to obtain 227 votes, i.e. 0.63% of the votes cast.

Despite his marginal score, Celil Yilmaz is a man of influence, as the confidential newsletter Intelligence Onlinepoints out. Secretary General of the Strasbourg-based Council for Justice, Equality and Peace (Cojep), he works “alongside Ali Gedikoglu, the director of Cojep, who is also known to be a long-time close associate of Mevlüt Çavusoglu, the current foreign minister and founding member of the AKP [Erdogan’s party]”.

In simple terms, the Cojep is the Turkish president’s transmission belt in France. One of its missions is to make Erdogan appear as the defender of oppressed Muslims in the world. Ali Gedikoglu denounces both Turkophobia and Islamophobia in France. These are objectives that the Cojep shares with François Burgat, president of the Arab Centre for Research and Political Studies in Paris (Carep), sponsored by Qatar, and a fellow traveller of the Muslim Brotherhood.

On Twitter, Celil Yilmaz (@celilcojep) refers to the Medyaturk website, created in 2014 by “volunteers”, which claims to have “no link with any specific structure”. Nevertheless, its titles are unambiguous: “A list of massacres committed by the PKK since its establishment”, or “A look at the massacres committed against Turks throughout history”. The last article denounces a “growing turkophobia” and the “repression of the Grey Wolves”, this paramilitary and ultra nationalist Turkish movement, whose French branch was dissolved in November 2020. One of the Grey Wolves’ sympathisers, the Franco-Turkish Ahmet Cetin, from Oyonnax, was tried in September 2020 for “inciting violence or racial hatred”, for having declared in a video (since withdrawn): “Let the [Turkish] government give me a gun and 2,000 euros and I will do what needs to be done wherever in France”. In his speech, he regretted that in Marseille, “there are too many pro-PKK, too many Armenians”, implying that he could prevent Armenians from demonstrating(1).

Denying the Armenian genocide of 1915

On 18 May 2022, Medyaturk explains that an exam subject, given by the Institut national supérieur du professorat et de l’éducation (INSPÉ) (National Institute for Higher Education) to future teachers, would stigmatise Muslims. The article states that secularism, according to the Ministry of Education, is “just a set of anti-Islamic rules”. The articles sometimes turn into conspiracy theories, as when Medyaturk explains that the massacre of 24 May, which left 21 dead, including 19 children, in a primary school in Texas, could be due to cyber torture(2) … According to the media, the Americans would have orchestrated this massacre, by setting up terrorists through inhumane means, i.e. the forced use of drugs, trauma and violence. As for cyber torture, it would use “special waves and frequencies with the help of relay antennas and satellites”, making it possible to “capture the brain print without electrodes and to provoke all kinds of stimuli”.

Moral: the American government would finally be capable of anything, including committing “such atrocities on its population”. Admittedly, this is not the only site to spread such nonsense. But how can we explain that a candidate who presents himself as “the voice of minorities” promotes Medyaturk via the Cojep?

Furthermore, the Cojep has published a booklet to help young people of Turkish origin “to express their ideas on the subject of the events of 1915, when they encounter problems during a statement and a history lesson at school”. Clearly, the AKP’s relay in France encourages students to deny the planned extermination of Armenians by the Ottoman Empire in 1915 and to express their opposition at school(3).

These communitarian and negationist excesses do not prevent the Cojep from being well established. And even worse, it has presented – in the general indifference – candidates for the French legislative elections!