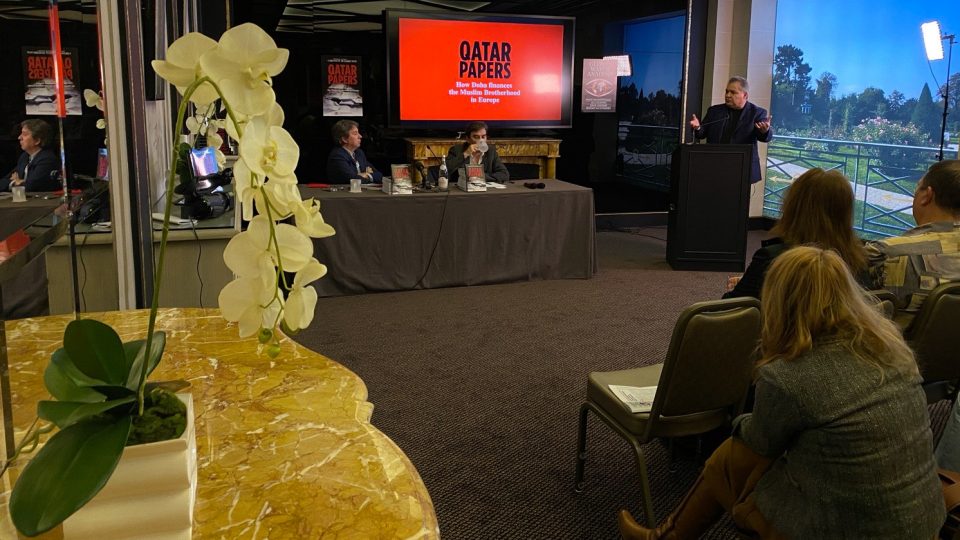 Global Watch Analysis celebrates the publication of the English edition of “Qatar Papers”.

At a ceremony held at the “Salons de l’Etoile” of the Napoleon Hotel in the Champs-Elysées district of Paris, Global Watch Analyses held a press conference and cocktail party to mark the publication of the English edition of the book “Qatar Papers”.

The authors of the book, Christian Chesnot and George Malbrunot, took part in the conference hosted by Global Watch Analysis editor-in-chief Atmane Tazaghart, in the presence of representatives of the media and news agencies, as well as publishers, broadcasters and booksellers.

See the full video of the conference

The conference was also the occasion to celebrate the one millionth visitor to the Global Watch Analysis website, launched on May 1, 2019. The event was attended by members of the committee of experts and advisors of the global-watch-analysis.com website and its newsletters “Ecran de Veille” and “Screen Watch”, including Christian Malard, Martin Gozlan, Jean-Marie Montali and Fabienne Durand.

See the video of the ceremony

During the press conference of “Qatar Papers”, the English edition of which is published by Global Watch Analysis, the authors Christian Chesnot and Georges Malbrunot talked about the long investigation they conducted, based on the internal financial archives of “Qatar Charity”, to shed light on the funding granted by this Qatari Foundation to associations linked to the Muslim Brotherhood throughout Europe.

George Malbrunot explained that the book “is not an attack on Qatar nor an invitation to criminalize the activities of Qatar Charity, as the funds mentioned are intended for legally authorized associations in the European countries where they are located. Therefore, the issue is not a question of terrorism financing”. Malbrunot considered that “the most important thing in the book is that through our investigation into the funding provided by Qatar Charity, we were able to draw detailed maps that illustrate the extent of the Muslim Brotherhood’s secret penetration throughout Europe”.

For his part, Christian Chesnot stressed that “the Qatari funds granted to associations linked to the Muslim Brotherhood, although not in violation of European legislation on the financing of terrorism, are clearly different from what other countries, such as Saudi Arabia, Kuwait or Morocco, are doing in the area of financing mosques and religious associations in Europe. This is because the funding of “Qatar Charity” is intended exclusively for associations linked to the Muslim Brotherhood. They are, therefore, part of a carefully premeditated political agenda, which aims to Islamise the Muslim communities of France and Europe, by supporting and strengthening the influence of fundamentalist currents associated with the Muslim Brotherhood.”

For his part, the editor-in-chief of Global Watch Analysis, Atmane Tazaghart, stated that “Global Watch Analysis has no problem with Qatar itself. We treat it as we do with all other Arab countries and for which we have no more sympathy or antipathy than for its neighbors,” and added that “the only problem with Qatar is the funding it provides to the Muslim Brotherhood and also to jihadist organizations, as we clearly saw during the Syrian crisis.”

Regarding the revelations of “Qatar Papers”, the editor-in-chief of Global Watch Analysis noted that “Despite the extent of funding revealed by the book for Muslim Brotherhood associations in Europe, this European component of the funding of “Qatar Charity” is only a drop in the ocean of funds that this Qatari foundation grants to Muslim Brotherhood networks in the Arab world and on the African continent.”