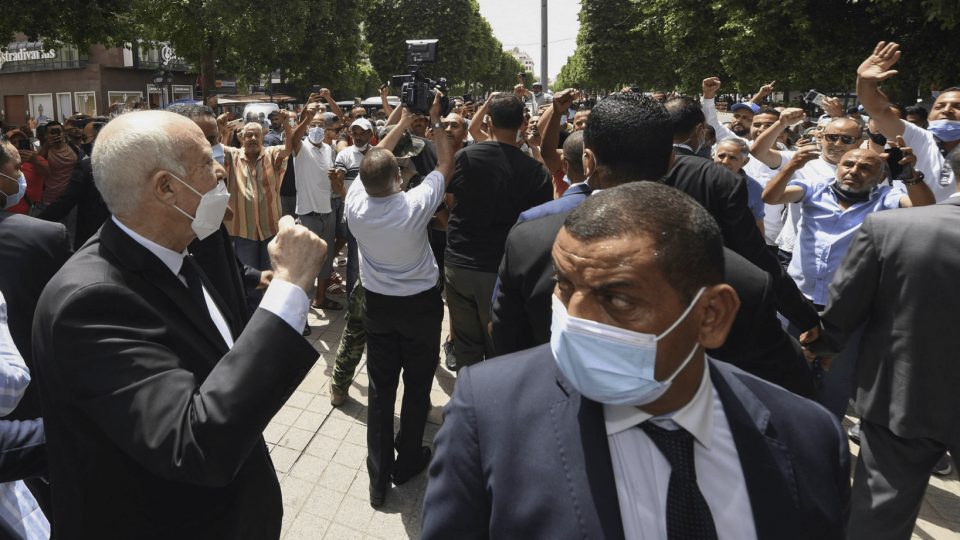 Tunisia: A coup or a “karcher” cleaning?

Tunisia is boiling under a scorching heat on July 25, 2021, its bank holidays. For the 64th anniversary of the Tunisian Republic, thousands of people took to the streets to demonstrate their discontent, demanding the dissolution of parliament and the departure of the Islamists from power. This rampant cancer has taken over all the strategic and vital organs of the country since the 2011 Revolution and the triumphant return from exile of the “Tunisian Khomeini” Rached Ghannouchi: Founder of the Islamic party “Ennahda”, President of the Tunisian Parliament but above all official representative of the Muslim Brotherhood in Tunisia.

The President of the Republic Kaïs Saïed, a former professor of constitutional law, an austere, enigmatic, ultra-conservative personality nicknamed “Robocop” because of his jerky diction and impassive face, created, in the evening of July 25, 2021, the surprise with exceptional announcements that were widely applauded and supported by the Tunisian people. By activating Article 80 of the Constitution promulgated on 10 February 2014, the President of the Republic orders:

1- Freezing the activities of the Assembly of People’s Representatives (ARP) for the next 30 days (renewable in the absence of a constitutional court).

2- The lifting of the parliamentary immunity of all deputies and the launching of legal proceedings against those accused of committing terrorist crimes and corrupt parties that received illegal funding (an investigation involving the Ennahda, Qalb Tounes and Aïch Tounsi parties has been opened).

These announcements had the effect of a bomb on the entire political class, especially those who brandish the Islamist label and their parliamentary allies such as “Qalb Tounès” and “El Karama”.

“Ennahda” denounced a “constitutional coup d’état” on the airwaves of its fetish channel “Al Jazeera”, an infallible supporter of the Muslim Brotherhood whose office in Tunisia was expressly closed and whose journalists were fired. This is without forgetting the sudden emergence of Egyptian preachers who call on the Tunisian people to use strong means to counter the putsch of the President of the Republic (this is the case of the preacher Wajdi Ghoneim residing in Turkey and banned from Tunisia).

In a few hours and after two years of astonishing immobility, the presidential “Mr. Clean” took action and fulfilled the wish of the Tunisian people, by chasing the usurpers off the political scene.

In a few hours and after two years of astonishing immobility, the presidential “Mr. Clean” took action and fulfilled the wish of the Tunisian people, by chasing the usurpers off the political scene.

Kaïs Saïed listened to the cry of distress of a desperate people, suffocated by an Islamist stranglehold and bruised by an unprecedented health crisis that ranks Tunisia as the country with the highest death rate from Covid-19 in the world per capita. To date, it has recorded 19,000 deaths for a population of 11.7 million.

This chaotic climate has worsened:

– With a government that is totally incompetent in its management of the COVID-19 crisis;

– An assembly shamefully represented where some deputies use both verbal and physical violence against their political opponents, like the Islamist offshoot “El Karama”. Several acts committed within the hemicycle should be prohibited by the President of the Parliament. Worse still, with the blessing of the “sheikh” and his cronies, trade and financial agreements with Qatar and Turkey have been orchestrated, which risks compromising the country’s independence and national sovereignty. This Islamist-backed foreign interference poses a serious threat to Tunisia’s very fragile political and socio-economic balance.

The glass, already well filled with so much exasperation and anger, finally overflowed with the chilling ultimatum of “Ennahda” which demanded from the Tunisian state a compensation of 3 billion Tunisian Dinars (about €1 billion). This “dignity fund”, as the Nahdhaouis call it, was intended to compensate, among their followers, the “martyrs” who suffered repression and torture under the former regimes (of supreme commander Habib Bourguiba and deposed President Zine El Abidine Ben Ali).

All these factors have fuelled the anger of Tunisians and increased their protests: the people who bravely revolted in 2011 are now crying out their suffering, their hunger and their fed up. They find in the President’s initiative the only possible recourse to straighten out the state, clean up the institutions, but above all to enable them to get out of the social misery that has plagued them since the departure of Ben Ali.

Chasing away the criminals, the terrorists disguised as MPs, the perfidious ones who sell off the country’s wealth to their friend Erdogan, are the people’s priorities and are simply a patriotic duty of every Tunisian citizen. These demonstrations prove without doubt the radical rejection by the people of the Islamist sect of the Muslim Brotherhood, a dangerous organisation, totally alien to the Tunisian soul and culture.

Political Islam in power is a danger that threatens the stability and sovereignty of the state. It has already shown its limits, notably in Egypt. And Islamism is incompatible with democracy: this is a fact!

Nevertheless, Kaïs Saïed’s decisions are not insignificant. They may jeopardise the democratic process, which has been under artificial respiration since its implementation. The irony of fate is that thousands of Tunisians are today, like their young democracy, in full respiratory distress because of the pandemic.

An important point to note, and one that underlines the failure of parliamentary rule since the first legislative election, is the absence, to date, of an active constitutional court. Supposed to come into effect within 18 months of the first legislative election in 2014, the constitutional court’s roles include taking over Article 80 and ensuring constitutional order. The reason for this flagrant delay is political incompetence mixed with the dishonest interests of certain parties that have been blocking, for several legislatures, any constructive dialogue, any possibility of a compromise that would allow progress on the democratic path.

Paradoxically and in the face of the emergency, the President of the Republic, Professor of the Constitution, has not expressed great enthusiasm for creating this constitutional tribunal and at the same time has not ceased to castigate his parliamentary opponents. The tug of war thus continues between two radically opposed political forces that have been tearing each other apart since the 2019 elections. Both are elected by the people: the President of the Republic and the members of parliament. Added to this is the ongoing conflict with the head of government.

Thus, Kaïs Saïed, who does not belong to any political caste, has turned the table upside down by seizing all the powers alone. As the guarantor of respect for the Constitution, he is taking a great risk by eliminating any possibility of counter-power. Are we living in a national emergency, the time to organise new legislative elections democratically? Are his intentions patriotic or just populist? Will he protect a democracy that was weakened at birth? Will he ensure the return of constitutional order? Will he defend the separation of powers?

Kaïs Saïed, as Commander-in-Chief of the Army Forces, actively deployed his troops (of which he has the full support), laying siege to the ARP on the night of 25 July, as well as to the residences of several deputies and politicians suspected of corruption. Two public holidays were introduced for all public institutions, particularly legal and financial, in order to organise his “clean-up” plan. Hyper-confidential files were found: is it the “secret apparatus of Ennahdha” involved in the assassinations of Chokri Belaïd and Mohamed Brahmi, two political opponents of the Islamist regime?

In the meantime, several Nahdaouis mayors throughout the country tried to burn any document that might incriminate them; some were prevented by the demonstrators.

Faced with this political earthquake, “Ennahda” seems to prefer the considered attitude of “Wait and See”, until the situation is clarified. It was content to denounce a “constitutional coup d’état”. The next day, he gave a favourable opinion to organise early elections as soon as possible! His only legitimate recourse, in the eyes of his voters and foreign supporters, to absorb the rage of the people. But above all to avoid leaving the political scene.

Democracy seen and applied by the Islamists is like a pernicious Trojan horse, emptied of all its active substance. Not surprisingly, the Islamist party received the firm support of Turkey, while the UN, France, Germany and the USA had a rather measured, even distanced attitude, calling for dialogue and order to ensure the continuity of the democratic process.

In fact, this uprising risks further destabilising the country and scaring away the few investors interested and/or involved. In addition, the West is wary of engaging economically with an over-indebted country that is entirely dependent on the IMF and is unable to pay its debts. Not to mention the thorny issue of jihadist terrorism that has plagued the country since 2013.

This situation can only worsen if the President of the Republic, through populist stubbornness and lack of a clear vision, delays taking solid action that will save the country and its young democracy from an imminent danger that has two faces: the return of Dictatorship and the entrenchment of Political Islam.

Today, Kaïs Saïed is the only one responsible before his people for what will happen. This unprecedented political purge should also allow for serious and independent investigations into the thorny issue of foreign funding of the 2019 legislative and presidential election campaigns.

While waiting for the veil to be lifted on the burning issues and for them all to be treated impartially, the “Knight” of the Tunisian Republic must urgently face the political, social and economic crisis that is raging. Will his risky gamble really save the country and strengthen the fundamental principles of its young democracy, the only real achievement of the Tunisian Revolution of 2011?