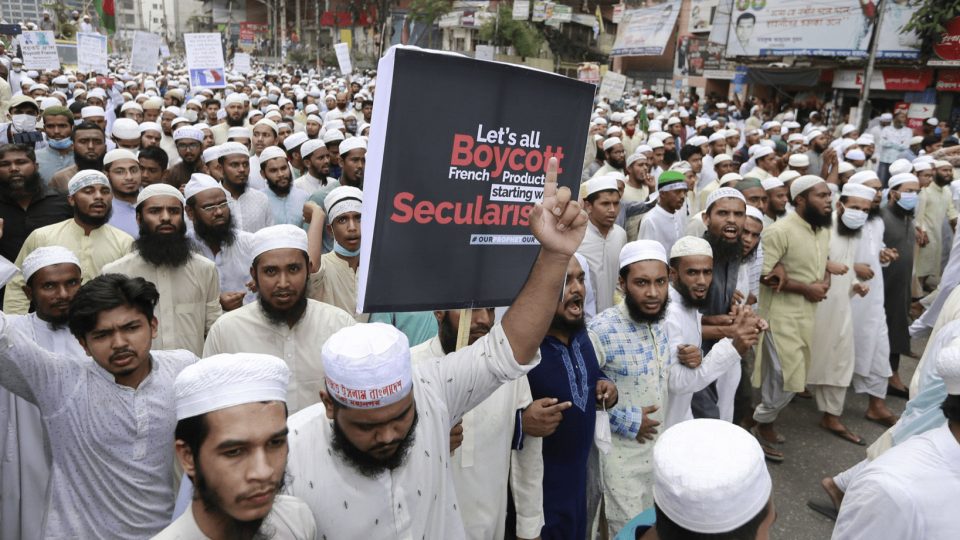 Bangladesh: The growing influence of Islamists

Bangladesh made headlines, last October, when thousands of protestors came out to the streets in Dhaka to protest against France. The protesters, around 50,000 in number, were demanding the closure of the French embassy in the country. A dummy of President Emmanuel Macron was also burnt during the protest with Junaid Babunagari, the Secretary-General of Hefazat-e-lslam (Hel) – one of the biggest Islamist groups in the country – stating that “Emmanuel Macron should beg for forgiveness.”. Apart from Dhaka, there were protests in smaller towns including one large protest in the port town of Chittagong, the headquarters of the Hel.

Again in March 2021, violent demonstrations in Bangladesh, reportedly by activists of Hel, lead to deaths of four during the recent 50th anniversary celebrations of the country. The demonstrations also coincided with the visit of Indian Prime Minister Narendra Modi.

Like the Tehreek-e-Labbaik Pakistan (TLP) in Pakistan, the Hefazat is also an influential group with a large support base. However, unlike the Pakistani political party, it has tactically not declared itself as a political party, even though its influence has been all-pervading and has threatened to dilute the historically moderate nature of Islam in Bangladesh.

During the birth of Bangladesh in 1971, after it broke away from Pakistan following a bloody war of liberation, language and culture was at the core of Bangladeshi national identity rather than religion. However, since the assassination of the country’s founding father Sheikh Mujibur Rahman in 1975 and increasing control of the military, either directly or as proxy for the next 15 years, conservative Islamic views became more central to Bangladeshi politics and society. In 1979, the commitment to secularism was removed from the preamble of Bangladesh’s constitution and in 1988 Islam was made the official state religion.

The gradual rise in the influence of Islamist forces from 1975 onwards was reflected in the increase in the number of religious Islamic schools or madrassa in the country. While in 1975 the country had 1830 approved madrassas, the number grew to 5793 in 1990. The military rulers of the country during this period, viz. Gen. Ziaur Rahman and Gen. H M Ershad, brought Islamists into the political mainstream and removed ‘socialism’ and ‘secularism’ as two of the ‘pillars’ of Bangladesh’s Constitution.

Bangladesh has seen an increase in terrorist activity in recent years, including attacks on foreigners, activists and religious minorities. This period laid the foundation for a society that would be more open to embracing of more radical form of Islam in the years to come. Radical changes were seen in initial decade of the 2000s, with the return of Bangladeshis who had participated in the West-sponsored anti-Russia conflict in Afghanistan. These ‘veterans’ sought to transplant their ideas in Bangladesh.

Therefore, from 1999 to 2005 Bangladesh, the world’s third largest Muslim country, was swept by a wave of Islamic militancy. It flourished under the administration of Prime Minister Begum Khaleda Zia, whose party the Bangladesh Nationalist Party (BNP) allied with the pro-Pakistan Islamist party, Jamaat-e-lslami (Jel) . The Jel with 18 lawmakers in the Parliament headed some crucial Ministries in the BNPJammat combine government. The party’s influence in the politics of Bangladesh continued, though with less intensity, even during the army-backed ‘neutral’ government from 2006-08.

During this period from 2001 to 2008, two jihadi groups, Jamaat-ul-Mujhideen Bangladesh (JMB) and Harkat-ul-Jihad-al-lslami (HUJI) had a free run in Bangladesh. Religious minorities and political opponents, including then opposition party leader and current Prime Minister of Bangladesh Sheikh Hasina were targeted. The Khaleda Zia government initially even denied the very existence of these groups, till there was an outcry in the local and international media and the US State Department threatened with economic sanctions.

Though when Sheikh Hasina’s Awami League government was voted to power in the 2008 elections and the concept of ‘secularism’ was restored in the Bangladesh Constitution, the country continued as an Islamic Republic. This was largely because the ruling government probably understood that though the Islamists did not win votes in elections, they exerted considerable influence in the social and cultural arena and in education, besides running a chain of ‘Islamic’ banks.

In the last decade, Islamists in Bangladesh have resorted to “street power” for mobilization against secularism. The Hel was formed in 2010 following a move by Sheikh Hasina’s government to abolish religious-based politics and the madrassa/religious school education in the country. In 201 3, the party took up the issue of blasphemy and in a 13-point list of demands, it called for death penalty for anyone committing blasphemy. The group also asked for an end to Bangladesh’s education policy, which in its view prioritized “secular” subjects like science and maths over religious studies, and called for compulsory Islamic education.

To appease Islamist interests, the government agreed to meet some of these demands. One major concession was expanding the government’s ability to crack down on those who “hurt religious beliefs” and for “acts of defamation.” Under this revised law, called the Information and Communication Technology Act, Bangladesh has arrested at least eight bloggers and charged more than 1200 persons since 2013, for their alleged crime of writing articles critical of the Saudi government, posting derogatory remarks about the Prophet Muhammed online etc. The Information and Communication Technology Act was replaced by the Digital Security Act of 2018. Though Hel did not see all their demands met, there is no doubt that over the last decade, the country’s education policy has also moved closer to Islamic education.

In today’s Bangladesh, there is another influential group who are aspiring to shape society according to their interpretation of what constitutes “pure” Islam: the Mullah or the Preacher. It has been observed that popular Islamic tele-evangelists reach millions across the Muslim world, spreading the notion that Islam in the Indian subcontinent must be “purified” of non-Arab elements. They prescribe Arabic as God’s language and promote that Muslims should use Arab practices and the language whenever possible.

As these Islamist groups and preachers, many funded by Saudi Arabia, attempt to change the religious character of Islam in Bangladesh, eroding its secular culture, even the constitutional concept that guarantees the separation of religion and the State, has started to be projected as anti-Islam by them.

With secular political parties like the Awami League forced to depend on the support of Islamists during Parliamentary and local body elections, it will take an extremely strong resolve on the part of secular Bangladeshi political groups and civil society to prevent the country from being overrun by Islamists and their ideology.